You are here: Products Something New by Cammie Cummins 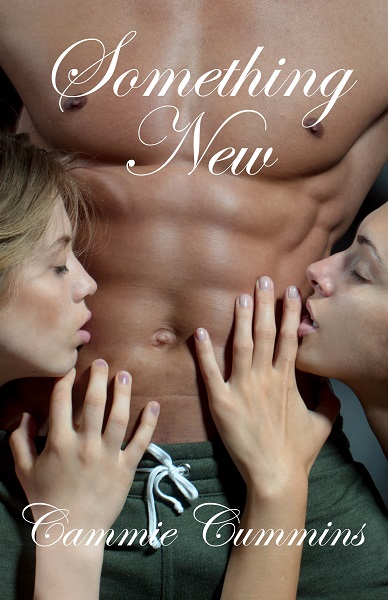 Something New by Cammie Cummins

In Time for Valentine’s Day! Why not try Something New.

Twice divorced, middle-aged Lacie had sworn off men forever. So while attending a wedding, alone, and a young and beautiful blonde named Daisy hits on her at the bar, Lacie decides to try something new. Little does she know, Daisy’s got a surprise in store for the older woman…and it involves her boyfriend Brad.

It happened at a wedding.
Not mine. Thank God. I’d already made that mistake…twice. This blunder was being made by the daughter of a co-worker of mine. That left me with no vested interest in the nuptials beyond professional obligation. And to consume as much free food and alcohol as I possibly could, which was exactly what I was doing the night before the big event.
The wedding planners had booked a block of rooms for us at a local no name motel. The place had three things going for it: clean rooms, a nice pool, and a well-stocked, open bar. Which was where I’d parked my clingy, tight dressed butt and was drinking watered down but free daiquiris.
Seated on a bar stool, I crossed my legs—the satin, robin egg blue dress rode nicely up my thigh—and smoked a cigarette, surprised neither the bartender nor other party goers harassed me about it.
Weddings, I thought, watching the dancing, drinking, groping young people swirling around the dance floor, colorful disco lights bathed their sweaty skin and modern dance music thumped from hidden speakers. As the night wore on inhibitions would crumble, copious amounts of alcohol would be consumed, and good sense would fly out the window.
Other than a few of my workmates, the ones like me who couldn’t dream up a good enough excuse to not be there, my co-worker, and her daughter—casually—I knew no one at the party. Without a plus-one, because marriage number two had ended in divorce less than a year ago, I was at the bar alone.
From my lonely perch, I watched the partiers get drunker, louder, and crass-er. Is that a word? But I did not remain alone for long. After a time, a pretty, young blonde sat next to me and ordered a drink. A Jungle Juice.
I waitressed at a bar in college a hundred years ago, so I knew that drink was made from fresh fruit steeped in vodka, rum, various schnapps, triple sec, gin, and…it was damned lethal.
She struck up a conversation by telling me her name was Daisy. She was a friend of the bride. I shook her warm hand. She had a pleasant smile and sparkling blue eyes. A California girl with the tan to go with the stereotype, I thought, being a little bitchy.
Of course she was half my age. So having the milky-white, freckled fair skin of the palest Irish women you’d ever meet, twice divorced, and dateless, I felt my bruised ego was justified compared to one such as her.
“Lacie,” I said, being cordial. “Friend of the bride’s mother.”
The girl’s shoulder length blond hair was combed and curled and perfectly coiffed—in drastic contrast to my short, roll out of bed, shaggy red mop. She had perky, little breasts of full display because she wore no bra under a sheer, see-thru, yellow blouse. She wore a short, pleated white skirt and her legs were long, tanned, and toned. A runner’s legs.
Though I didn’t ask, she told me she was there with her boyfriend, Brad, but they’d had a fight. There was trouble in the relationship, she admitted.
“I’d love to give you some advice,” I said, feeling very motherly, “but, I’ve struck out twice when it comes to men, and have forsaken them forever.”
She gave me a funny look and smiled. “I hear you.” She raised her drink and we toasted. “Maybe we’re just swinging for the wrong team.”
“What do you mean?” I asked, blissfully ignorant.
“Lately, I’ve been having these feeling, like I’d be better off with…a woman.”
I smiled. “You would be. At best, men are jerks.”
Daisy sipped her drink. “Have you been…with women?”
Taken aback by the question, I stammered, “What? You mean…No.”
“Really?” She stared at me over the rim of her glass as she sipped her drink. “That’s too bad because I think you’re kind of sexy.”
I gave her a look. “Me?”
I didn’t add, I’m old enough to be your mother.
She put her drink down and reached out, ran her hand up and down the back of my bare arm. “Sure. I mean look at you. You’re gorgeous.”
I felt myself blush. “Stop.”
“No. You are.” She leaned in and whispered over the music. “Sexy, too.”
Not sure what to say to that. I’ve never had a girl flirt with me before. “I, um, think you’re sexy, too.”
“Did you ever think about it?” She put her other hand on my bare thigh and ran it up my leg, her fingers slipped under my dress. My heart skipped a beat and my mouth went dry.
I gasped and swallowed hard. “Think about what?”
“Sex. With a woman.”
“Um, no. Well, yeah. I suppose…when I was young. A very long time ago.”
“Not that long ago.” Daisy smiled.
Again, I blushed. “You’re very kind.”
Daisy leaned in close to me. She kissed the side of my neck. Her blond hair smelled fresh. Like apricot. Her voice low, she said, “I’m not being too forward, am I?”