You are here: Products Soldier: A Medieval Christmas Story by Catherine Lloyd 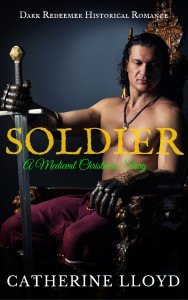 Two linked tales of two amoral men transformed by the women who love them. Set in 13th Century England at Christmas.

In Mercenary, Lord Broderick, has been made a new father but his wife dies in childbirth and his infant son is failing to thrive. Then Tess is brought before him, the daughter of the lord whose lands Broderick has usurped. The new master of Castlemuir confines the young woman to his inner sanctum to nurse his son, unaware that Tess poses the greatest danger to him of all.

In Jester, Dumas, a hideously deformed clown travels the countryside in a caravan with his young assistant, Fallon, a young woman disguised as a boy. In return for keeping her identity a secret, Fallon must perform for the misshapen man each night. But Dumas has a secret of his own as Fallon soon learns after a performance at Castlemuir Hall.

Catherine Lloyd is a mother and author of over 20 romance and mystery novels under various pen names. She loves reading, writing and red wine–not necessarily in that order.

Be the first to review “Soldier: A Medieval Christmas Story by Catherine Lloyd” Cancel reply