You are here: Products Sold to the Daemon King by Tina Franklin 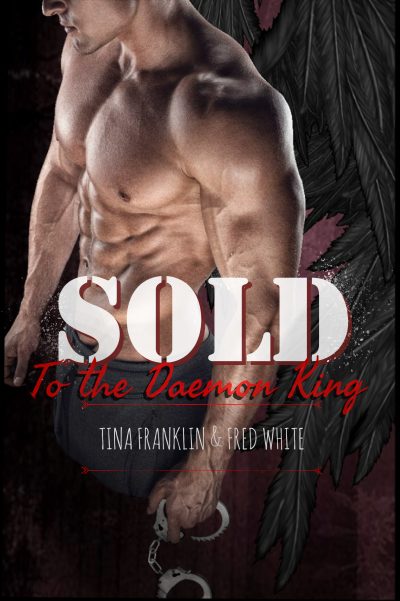 Sold to the Daemon King by Tina Franklin

I was an ArchAngel warrior in the land Above.
But when I Fell, everything changed.
After roaming the mortal lands for three years, I was captured by UnderWorld slave traders.
I was caught.
I was chained.
I was sold.
And now, my new Master has promised to claim me… in every way.

Summer has been running from danger ever since she fell from Above. After she is captured by a group of UnderWorld slave traders, she believes her life is over. Chained and humiliated, she is sold to the highest bidder of the Daemon aristocracy; the dominating and darkly handsome King Daviel. All seems lost to Summer, until she finds an ally in her place of nightmares.

When Summer meets the mysterious and charming Kaine, his kindness makes him her friend but his knowledge makes him her ally. Through Kaine, Summer discovers that she has the ability to shake the foundations of the UnderWorld. That is…if she can get close enough to the Daemon King to do it. Getting close to Daviel should be an easy mission for the beautiful Summer, but being an ex-ArchAngel has its shortcomings… The biggest being that she has never been with a man.
If the Daemon King’s new pet is to become his favorite and most trusted, she’ll need someone to teach her how to submit.

As Summer falls into a tangled web of lies and lust between the two men, she must choose between the light she was born from, or the darkness her heart has begun to desire.

Tina Franklin's life is a weird blur of horses, cheese, canoes, and too many Freudian jokes. She loves writing, but wouldn't be able to accomplish anything without her soulmate, Fred. They fell in love over their first shared taquito platter and he has been her muse and editor ever since.

Heavy manacles at my wrists, ankles, and neck yanked me forwards from the darkness of the curtain framing the side of the stage, and into the spotlight of the platform. I fell onto my hands and knees, feeling the hundreds of pairs of eyes on me before I turned my head and saw them.
The hungry, lusting eyes of the UnderWorld aristocracy took in my scantily clad form, helpless on the stage, while the auctioneer began to holler out my price.
I was dazed–from the drug they’d used to capture me– and it all came flooding back to me.
I was at SEX CELLS, the famous slave-trade auction of the UnderWorld. And the eyes on me… they were from the buyers of the high court royals of the UnderWorld. They spoke in hushed tones, reacting to the auctioneer’s pricing it seemed, but I had no idea what he’d said.
I didn’t speak Daemon.
As my senses returned to me, adrenaline pumped through my body, urging me to flee. I shoved off my hands and knees and struggled against my chains, yearning for the concealing darkness of the holding cells backstage, only to be yanked back down to the hard ground. Pain sang through my bones, and men dressed in black positioned at the sides of the stage stepped out of the shadows, holding my chains taught.
“Hold still, you little slut,” sneered the largest one.
I would do not such thing. I spat at him, and it landed on the toe of his boot.
My rebellion earned me a sharp pain at the back of my thighs– exposed beneath the short hem of my dress– which followed a cracking sound that lashed through the air.
I screamed as the stinging pain of the whip broke through my skin, forcing me to my knees once more. The laughter of the men holding my chains echoed around me and the pleased hisses from the onlookers reverberated around the action house. I felt sick, like I might vomit, but I closed my eyes and remembered what was important.
They don’t know your secret… you can keep it hidden still, I told myself, but at the auctioneer’s next words, I nearly lost control.
He’d bellowed out some words in Daemon, then mercifully repeated his words in the common tongue.
“Will no one bid the starting price?” the small rat like Daemon called out to the crowd. His words were followed by a stream of whispers from the audience. I heard a gravelly voice call out from the sea of onlookers,
“The price is too high for an unbroken slave!”
“Now,” the auctioneer said, more earnestly, “She is a rare specimen of her kind; a human fit to serve a king… beauty such as hers is rare. She has too much spirit, yes, but she would be most delightful to break.” I broke into a cold sweat as his lecherous voice said, “Allow us to begin the process and show you all how pleasing to would be to make her submit!”
I struggled in full now, yanking at my restraints, but it was useless. The man I’d spit at grabbed my hair, yanking my head back, and the other to two forced their hands between my thighs. The began spreading them apart, and tore at the sheer nightdress I donned to bear me to the leering crowd.
I screamed in earnest, until a cold, sharp voice sounded through the room. “That is enough,” it said, silencing both the excited noises of the crowd and my screams. It was the kind of voice that thundered through you with unrelenting authority, and the room seemed to grow still.
My vision became hazy with panic and I found myself on the brink of fainting. As I struggled to remain conscious, I watched the man stroll down the center of the crowd up to the lip of the stage. I could just barely make out his darkly clad form and inky black hair.
The exhaustive relief I felt from knowing my public humiliation had been prevented was enough to force my body to slump onto the stage, heaving. I fought away unconsciousness, trying hard to catch the man’s face. I would not be blind to my next captor, as I had been to these ones.
The auctioneer stumbled in front of the man in black. “Mi-Milord… this one is disobedient. Wretchful, even– I, I do not doubt you possess the ability to control her, but… would you not prefer one that has been trained? They are so much less work when they’ve been through the breaking–”
The man seemed to give the auctioneer a sharp look, and the room felt even colder. Goosebumps rose on my skin, and the auctioneer stopped talking and stepped quietly away, submissive. The men holding my chains worked quickly to undo them, though they then linked them around my wrists and ankles instead. When they were finished, the man clad in black–even more blurred, now– lifted me into his arms.
His chest was firm, and his arms circled me easily. Despite the panic of being in a stranger’s grasp, my hands and feet bound, my body gave itself over to his touch. He slid his hand over my eyes and simply said, “sleep.”
A cooling calmness began to wipe away my thoughts, as a soft night breeze often caresses away a worry, and the last I heard him say was this:
“She’ll break to my will. They always do.”