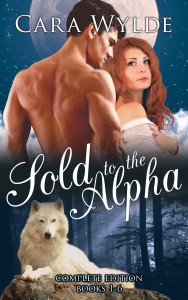 This complete edition contains all 6 books of Sold to the Alpha. It’s the full story of sexy, curvaceous Avelyn and her hot Alpha, Max Blackmane. No cliffhangers!

Avelyn is a shifter bride, which means she has been raised and educated to become the wife of a shape-shifter and bear his children. The problem is that she doesn’t want to accept this fate. She will do everything in her power to gain her freedom and build a new life far away from shape-shifters and what society expects of her.

Alpha werewolf Max Blackmane is in search of a bride. When he comes to Alma Venus Boarding School, one of the best schools for shifter brides in the world, he is determined to buy a young woman who would bring him political advantages. However, when he sees Avelyn, his plans are turned upside down. He can’t imagine his life without her.

Avelyn uses every trick to convince Max to buy another bride. It doesn’t matter that his perfect body and smooth voice make her weak in the knees. She has a dream, and her dream does not include a wolf-shifter who thinks he can simply own her because the peace treaty between humans and shape-shifters says so.