You are here: Products Sold To My Big Black Billionaire Boss by Darian Brasher 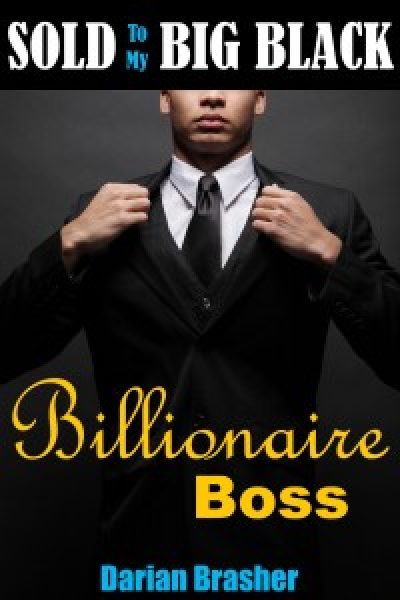 Sold To My Big Black Billionaire Boss by Darian Brasher

Omar Sinclair is a black billionaire alpha male with a taste for voluptuous white women and a burning ambition fueled by racial resentment. Natasha is white, curvy, and married. Omar makes Natasha a tempting proposition, one that will solve her many money problems: sleep with him for more money than Natasha has ever seen while her racist white husband Angus watches.

What will Natasha do? Will she humiliate her husband by sleeping with a big black man for the first time? Will she discover she has a taste for both dark meat and the finer things in life?

I am an erotica writer by night, and a lawyer by day. Take a guess as to which one is more fun for me. I am not sure what I love more: having sex, or writing about it! I write about the things that turn me on. I figure if they turn me on, they have got to turn others on too.

It was a day of firsts: the first time I had taken a helicopter ride; the first time I had traveled to a tropical island; and, the first time I had been sold to a black man.
For, that was what it was. Why sugarcoat it? I had let myself be bought and sold like some prize heifer. Like some whore. A million dollar whore. The only thing that separated me from a streetwalker was several decimal places.
No, that was not entirely true. I was excited over the prospect of sleeping with my black boss. Did a whore get excited over the thought of sleeping with a john? I suspected not, though I had not conducted a poll on the issue.
A whore poll: it sounded like a stripper pole, only stickier. I felt myself smiling slightly at the thought.
The smile faded when my thoughts turned back to Omar Sinclair, the man I was flying to see. “Flying to see.” Why bother using a euphemism? I was flying to fuck him, to spread my legs for a man who was not my husband. For money. I was both a whore and an adulterer.
But, it was not just for money, though. If I had admitted that to my husband Angus, he would have never gone along with the arrangement. A part of why I had agreed to sleep with Mr. Sinclair was due to the man himself. He was a man who could afford to drop a million dollars for the privilege of spending a week with me, for the privilege of buying me for a week. I was but a lowly secretary in one of his companies. I was just a tiny, inconsequential cog in a complex, multinational machine that Mr. Sinclair was the creator and hub of. I would have been less than human if I had not been flattered by the fact that I had attracted Mr. Sinclair’s attention.
But, it was not just Mr. Sinclair’s wealth and power that excited me. It was the man himself. He was a tall, light-skinned black man who would turn heads even if he had not been renowned as one of the richest men in the world. His piercing hazel eyes looked through you like a jeweler looking at a gem. It was as if they looked at the very essence of you, assessing your purities and impurities, evaluating your worth.
In addition to that, there was a force to the man, a magnetism to him that was undeniable. It was as if he was a black hole: when he walked into a room, he sucked up all the oxygen and all of the attention.
Plus, that prominent and unmistakable bulge in Mr. Sinclair’s dress pants hinted that the rumors I had heard about black men’s physical endowments were true. I tingled at the thought of that bulge and the promise it held.