You are here: Products So Unexpected by Amanda Wilhelm 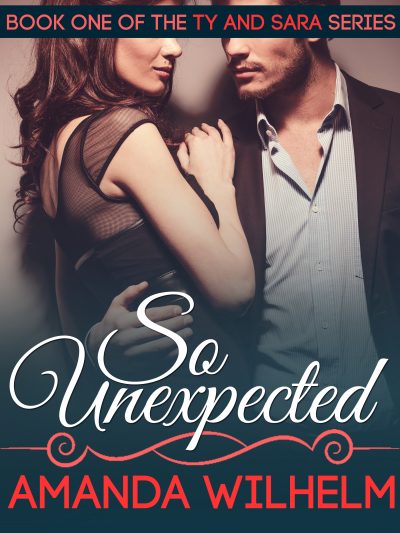 So Unexpected by Amanda Wilhelm

It was just supposed to be a vacation.

It’s been over a year since Sara’s husband died. The one thing she doesn’t want is another Christmas at home without him. So, budget be damned, she books a ski trip to the Rockies. A change in scenery, she figures, would do her and her two sons a world of good.

After another fight with his on-again off-again girlfriend, Ty hops a flight out of LA. Destination: the mountains. Plan: ski as much as possible. Then he’ll head back to LA and be just fine, playing out with his band every weekend. When he sees Sara from the chairlift, kicking butt on one of the toughest trails on the mountain, he decides right then and there to add her to his to do list.

Sara is flattered when Ty approaches her, but a no strings attached encounter isn’t her style. “Thanks but no thanks,” she tells him. What she doesn’t know is that Ty isn’t the type to quit before he gets what he wants. And what Ty doesn’t know is that a week is not going to be enough. Not even close.

This is Book One of Ty and Sara’s story. Book Two: My Angel and Book Three: Forever is Here, may be found on Amanda Wilhelm’s Amazon page.

I always loved reading but I never tried writing. The closest I came was a literature minor in college, which future employers found rather odd, given my Mechanical Engineering Degree. I always had stories in my head so first I wrote two screenplays. The third story I couldn't figure out how to write as a movie, so I ended up writing it as a novel. That was my first book, "Mistakes". I just keep writing, though I must admit, after six plus years of self publishing writing has ruined reading for me a bit. I read everything noticing every detail and nuance.

The first book I wrote had a really tragic ending. I wrote this one because after that I just had to write something with a happy ending. It takes Ty and Sara three books and over six hundred pages to get there, but I promise, there is a happily ever after.

Ty slid into the gate next to the two guys waiting.
"You mind if I ride with you?" he asked the two guys already in the gate.
There was no one else in the line, but Ty was kind of tired of riding the lift by himself. It seemed like he hadn't talked to anyone all day.
"No problem," one of them said, and they all skated out to catch the next chair.
"You here on vacation?" the guy next to Ty asked.
"Yes," Ty told him.
"Us too," the guy replied, "We're from Connecticut."
"LA," Ty said.
They made small talk for a couple of minutes. Ty glossed over his music career and focused on the construction work which made up the bulk of his employment. At least it did as far as bringing in the majority of his income. That particular topic of conversation made him think about Missy, which was the last thing he wanted to think about. After all that was the reason he was here. He thought about the message she had left him, on his cell phone, Christmas morning. He had listened to it waiting in line for security, at the airport. Then he had texted her that he was boarding a plane to Colorado and would call her when he got back. Then he had turned his phone off.
Ty guessed he would have to call her when he got back. Although she had said it was over and kicked him out of her bed, her beachside condo and her life Christmas Eve, her message Christmas Day made it clear she didn't mean it. Again. Trouble was, this time, Ty had accepted it as fact and actually found, to his surprise, all he was feeling, driving back to his crappy apartment with Andre was relief. Now he was determined to make it stick this time.
There was a slim chance someone might call, looking for Ty to fix something around their home, while he was gone but, as he had been scheduled to work all week, he wouldn't have been free to do any extra jobs anyway. Ty had called his boss and left a message Christmas Eve after he booked the flight. Gill had texted him Christmas morning. "You're a dick and I wish I could fire you. Keep this shit up and one day I will." Ty wasn't worried about that. Ty knew his way around all aspects of a construction site and Gill was used to him missing a day here, or a week here. Once, over beers, Gill had confessed that Ty was the best worker Gill had ever had. They weren't quite friends, but Ty always worked his ass off for Gill, which Gill respected, and in turn Gill didn't mind Ty missing time occasionally, to play an out of town gig with the band.
"Hey there she is," said the second guy.
Ty looked down at the trail and saw a woman in a red coat and purple helmet bombing down the mogul run. He had been down that run, earlier in the day, and had realized he hadn't been skiing in a lot longer than he had thought. It was a very tough run, but she was making it look easy.
"She's a ski nanny," the first guy said.
"We think she's a ski nanny," the second guy corrected him, then for Ty's benefit he added, "We saw her skiing with a couple of kids yesterday."
Ty wasn't really sure what a ski nanny was, but he didn't care that much. Any women who could ski like that was definitely interesting. Ty had dated some nannies, when he and Andre had first moved to Los Angeles. The memories made him smile.
"Have a good run," one of the Connecticut guys told him.
They were almost to the top.
"You too," Ty replied.
They all skied off the lift together and separated, the two guys from Connecticut heading off immediately, to the trail to the left of the mogul run. Ty decided the mogul run was worth another shot. He took a minute adjusting his goggles and pole straps and prepared to ski down. It had been almost four o'clock when he had boarded the chair, so this was the last run of the day. He took a minute to ponder his chance of seeing the ski nanny again. The way she was skiing he'd never catch up with her on the mountain. Probably a lost cause. As he took off down the trail he resolved to keep an eye out for a red jacket paired with a purple helmet. Just in case.
CHAPTER 3