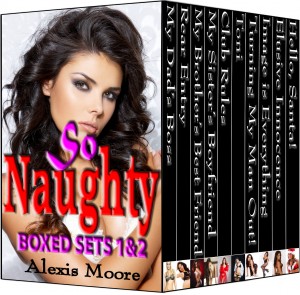 Victoria’s dad loves his midday drink but doesn’t have a head for hard liquor. Now he’s in trouble with his boss and needs her to convince the man to let him keep his job. When she was younger, a sweet smile and a little pleading had done the trick. But now that her dad’s boss is retired, it will require more than smiles and begging to convince his sexy son.

Kelly Ashdown has loved Simon, her brother’s best friend for years. And now that she’s almost nineteen and about to start university and a life of hedonism, she’s determined that he will be her first. But Simon is ridiculously noble and too much of a good friend to her brother to seduce his little sister. Kelly means to show him that nobility is no match for a young woman with a bothersome problem.

Lily has lived in her slutty big sister’s shadow all her life. A former model, Suzanne, can get any man she wants, but that didn’t stop her from stealing the one Lily wanted. Now, Suzanne has a new boyfriend: sexy, rich, handsome Alexander Llewellyn whom she’s lied to, pretending that she’s untouched. Alexander is disappointed when he realizes that Suzanne has lied, but he forgives her. Suzanne, however, can’t stay faithful to any man, no matter how handsome or rich for more than a week. When Alexander visits unexpectedly and Suzanne out with another man, Lily decides that Alexander deserves better than her lying, cheating sister. Plus she’s got what he wanted so badly.

Nineteen-year-old Paul Delaney steals his father’s membership card and enters the decadent world of the exclusive men’s club his father has belonged to for years. When he meets beautiful fuller-figured Marianne Styles whose husband millionaire husband Timothy seems more interested in the young women brought in for entertainment than his wife, Paul suggests that Marianne gives her husband a dose of his own medicine, with his help. What Paul doesn’t realize is that the club has special rules.

All her life female hermaphrodite Toni Montgomery has felt that something was missing. Beautiful, bright and successful, she has lived a life bringing pleasure to people around her, but will she ever find someone for herself?

TURNING MY MAN OUT!

When Vanity discovers that her man might be susceptible to being taken, she sets about conquering him.

As Mistress Ophelia, Chloe Daniels indulges her voyeuristic fantasies to the full. Having loved and lost the love of her life, she’s content to live vicariously through others. Until, that is, she gets a glimpse of the aristocratic Mr Perfect and his not-so-aristocratic endowment.

Venezuelan Lisel Herrera will do anything to get her mother out of the hellhole of a jail where she’s serving time for protecting her daughter from the advances of a corrupt policeman. When an opportunity to earn money pretending to be younger comes her way, she jumps at the chance knowing exactly the kind of man her handsome, wealthy employer Gareth Anderson is. But she’s drawn to him against her will.

Laura Bowman has had a Santa Claus fantasy for years and fully expects it to remain a fantasy, until she innocently sits on Santa’s lap to convince her niece that Santa is harmless. She discovers that Santa is anything but! When he promises her a spanking for Christmas, all she has to do is turn up for the rendezvous. Will she dare?

He looked suave and even better looking now, sitting behind his father’s desk and wearing a light grey shirt which perfectly matched his eyes. I stared at him stupidly for several seconds, realizing in horror that except for the top which occasionally rode up and showed the undersides of my breasts and the short skirt my mother often threatened to burn or give to the twelve-year-old girl next door, I was naked to his gaze.
“So, Bruiser, what can I do for you?”
“I’m here to see your father.” My voice came out wobbly.
“My father retired three months ago. He and Mum are currently on a Caribbean cruise.”
“So who’s in charge?” I asked, hoping that I was mistaken in thinking that he was.
“I am, of course. Who did you expect to be?”
This is why my dad was worried, I realized. Old Mr Hudson had known him for years and knew how good he was at his job as an investment banker. This young upstart would only see the money he would lose if he lost Mrs North’s account. I decided it would be foolish to beg him for anything.
“Never mind, then.” I grabbed the side of the door wishing that I could back through it instead of having to turn around and walk through it. My mother claimed that the cheeks of my ass were visible under the skirt, but I disagreed totally. The only things visible were the tops of my thighs as they curved into my ass, but I didn’t particularly want him seeing that much of me.
“Come back here, Bruiser!”
I wanted to stick two fingers in the air and tell him to sit on them, but my father’s job kept me in a style to which I had become accustomed. If he lost it, I would have to find one of my own.
I turned around obediently and stared at him.
“Come closer.”
Walking slowly back to his desk, I willed my breasts not to bounce. They didn’t, but to my horror I felt my nipples hardening as his eyes zeroed in on them.
Bastard!
Instead of offering me a seat, he looked me up and down, slowly, assessingly.
“Did you come here dressed like that hoping to entice my father into reinstating your father’s job?”
“Reinstating?” I repeated, wanting to punch his lights out now. “You fired him?”
Double bastard!
“I haven’t fired him yet, but he’s left me little choice in the matter. Mrs North is a pain in the ass, but she’s a multi million-pound pain in the ass. Sometimes you have to endure the pain, no matter how much your ass hurts, to get to the pleasure of the profits afterwards.”
Maybe it isn’t too late to stick those fingers into him, I thought.
“So, you came here flashing lots of cleavage and even more leg, hoping to make my father lose his head?”
“I didn’t,” I protested indignantly.
How dare he think so cheaply of me?
Triple bastard!
“I would need a lot more than a flash of cleavage and the sight of your long legs.”
“I wasn’t offering you anything.”
“Really?” He sounded so uninterested I wanted to knock his perfectly groomed head off his broad shoulders. “That’s a shame because I was willing to be convinced.”
“What would I have to do?” I asked hesitantly.
I would give him a blowjob in a heartbeat, but nothing else. I don’t like sex. I can’t imagine why people have it, except to have kids. My ex-boyfriend, Mark, and I had fooled around when we were sixteen. I hated it! The pain, the…ugh! After the fourth time I told him I wasn’t doing it anymore. And after a month of giving him excellent blowjobs, even if I say so myself, he broke up with me to have ‘proper’ sex with Darla, my bitterest rival all through secondary school.
“I want you to strip for me.”