You are here: Products S&M by gareth mayers 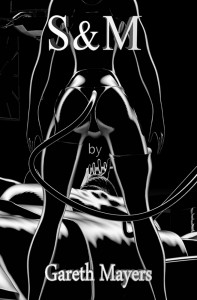 Morgan takes a gorgeous woman into his home, who turns out to be a notorious space pirate on the run from the law. The blond vixen, clad in tight red leather holds him hostage within his own apartment, where she gives him an experimental drug designed to accelerate the evolution process. He is transformed into a super human. Then the mature goddess forces him to use his new found power, to help her escape from a group of space cops that have been doggedly pursuing her across the star system, for the theft of the experimental drug. Morgan try’s to resist his capturer, but he is helpless against her will and in the course of time begins to enjoy his new found roll as her slave and plaything.

hello, I am Gareth Mayers , a twenty six old male author living in the Caribbean. I’m mainly interested in science fiction and fantasy but I try to bring in a little strange human interaction and relationships into other wise stereotypical story. I only write about interracial relationships cause I think is more exciting and adds another aspect to the sub plots. I hope you have fun reading what I’m writing.

This is a quick read, a short story really, that I conceived when I was thinking about superhero archetypes, and I ask the question. What if we had a superhero team that was female led, but this female uses pleasure and pain to lead, and what if these things tied back into their powers? What would that look like, hence the characters Massy and Sadie where born. While it’s short and fast-paced, this story resonates with a deep hidden part of most males, who sometimes wonder what it would be like if a woman where to use all her sexual charms, to manipulate you for her pleasure. The greatest joy is giving, right? So give it a try I guaranty, that even if you’re not into BDSM you will still find this entertaining. While it has sadomasochistic elements, the real story is very much mainstream superhero like stuff.

S&M
It was a late rainy night after a hard day of work. Morgan was tired when he was awakened to a loud noise. He would have let it pass if it were by the door, but the noise was coming from outside his living room window and, being on fifth floor, he thought someone must be trying to break into his apartment. He grabbed his baseball bat and made his way to the living room area. The window glass was too dirty to see anything clearly, but he could still make out someone on the fire escape. Opening the window in one quick motion, he found himself staring at the muzzle of a gun; he froze for an instant not knowing what to do. Then he took note of the of the firearm’s owner.
No normal criminal, she was a tall woman with short, shoulder length blonde hair in an open red leather trench coat with matching panties and bra. Scarlet fishnet stockings draped her long legs, then hid themselves in her crimson? leather boots. She also had devil like horns on her head with a matching tail on her backside. He could see she was injured. There was blood on her coat and running down her hand. She was weak, struggling to keep the gun pointed at him. He thought she must be a stripper or prostitute who had got into some difficulty on the upper floor. Whatever the reason, it did not matter as she looked deep into his eyes, the rain moistening her flawless porcelain skin and asked him for help. All she needed was a place to lie low for a little while. He wondered what sort of trouble she would bring into his life. His life was based in the projects located in a hard part of town, and helping her was going against every bone in his body. The street rules he had grown up by were telling him like scripture, keep clear of this woman. But he stole a second glance at her curves, smooth skin and ample breast. That was all he needed to bury his conscience and compel himself into complying. He told her to come in, and she smiled. Once inside, she sat on the arm of his reading chair. He brought her a glass of water and asked if she was hungry, then inquired about her injuries. She told him not worry because it was just a flesh wound. She then told him not call for help. All she needed was a rest. He was skeptical of her story, having had a violent past and being a connoisseur of violence from a tender age, he could tell serious injuries from miner ones, and hers looked to be serious. It bore all the signs of a gunshot wound. He was tempted again to listen to his mind; after all what if she died in his place? If the cops found a white woman died at his apartment, they would put him in a box permanently. It wouldn’t matter if she were a whore or not; they would only see the fact she was white and pretty. But then he stared deep into her eyes- those big green eyes- and again he was forced to listen to her.
So against his better judgment, he went back to his bedroom. Before entering the door, however, he stole one more look at her as she sat there. The rain hit the windowsill, bursting into a mist like effervescent which sparkled in the light of the nearby street lamp. She seem to glow in this space, and he knew that never before had this much beauty inhabited this place. He tore himself away from his view and retired to his bed. While lying with his thoughts, his mind began to focus on the sexy woman who was now in his apartment. He could not help but let his mind wonder to dark places, and soon he began to reward his thoughts with physical gratification. Once his body reached its limit, he soon felt guilt and pondered the creature that is man. How sick we men are was his last taught before he fell asleep.
In the morning he woke up to find that his new house guest was lying right next to him naked. Even more distressing, his sheets were covered in blood, and he was fastened to his bed with rope, unable to move.