You are here: Products SLUT! by La Marchesa 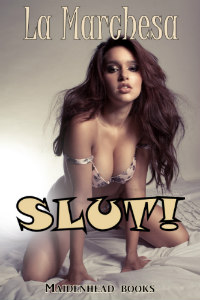 Restive mom has an affliction. Suffering from periodic sexual compulsion, she’s not sure what form her need takes. When internet friend, easy Ed makes an indecent suggestion, she’s hooked.

I’d never done anything this crazy. Meeting a man—a stranger—without even knowing what he looks like. Yet here I am, waiting, for him to pick me up at a bus stop, anxious, but excited, filled with apprehension and…need…so much need!

I write stuff others won't ie: Public Disgrace at THE CLUB

The scheduled bus stopped and the people who'd been waiting, climbed aboard. I glanced at my watch. He'd said one o'clock and it was a quarter after. He'd better hurry, I don't have all day.

Finally, a late model SUV pulled up to the curb and rolled down the passenger window. A pleasant looking, thirty-something, blue-eyed man with a sandy colored receding hairline and a flirty smile leaned over. "Are you 'restive mom'?"

Purse in hand, I nodded and rose. I was about to do it. My nipples swelled and between my legs, warmth emerged. Once I get in that car, there's no turning back. Wobbly kneed, I edged up to the car. "You must be 'easy Ed'."

His smile widened. "That's my handle."

I opened the door and hopped in. As I buckled my seatbelt, he took off with a jolt. "Sorry I was late."

His car traveled forty miles per hour. No chickening out now.

Not that I want to.

"We have to hurry, my four year old will be dropped off from pre-school, at five-thirty."

I looked him over. He wore jeans and a polo shirt. His build was wiry and athletic. I sensed he might be a good lay.

What in Christ's name am I doing?

He held out a sleep mask. "Put this on."

I reached in my purse and pulled out the Mardi Gras mask I'd had for years. "I brought a mask."

Since we both wanted to remain anonymous and because he was taking me to where he lived, I'd agreed in advance to be blindfolded.

"That's fine for when we get there, but for now wear this."

I nodded and slipped the sleep mask over my eyes. Darkness overtook me, and with the darkness, my mind raced.

Easy Ed and I met on the internet a few weeks previous. At first, the flirty messages we exchanged seemed innocent enough. Even when they became suggestive, I thought nothing of it. Sure, they turned me on, but I handled it. But not today. Today was different. Today my dark, primal lust, had returned with a vengeance as if a feral Beast which hid in the depths of me had been released to play havoc in my life.

Though my hunger, when it came, was great, I'd never indulged it. I was a married woman, after all. After an uptight miserable day or two, it would pass. Then I'd go back to being a bored housewife and mother, banishing the hunger from my thoughts until it struck again.

This time when the need came upon me, it was more compelling than ever. This time fingers or vibrators would no longer suffice. I sought comfort from my internet friend. Easy Ed seemed almost clairvoyant. He sensed my yearning and seemed to know what I needed.

His last message—his wicked naughty proposition—got to me, releasing the wanton lust that resided in me. Easy Ed, a man I never met, put my hunger into words. Mesmerized, I'd stared at my laptop, digested the debauched scenario he laid out in great detail. By the second time I'd read it the tiny ember of lust that rested within my nether regions had burst into flame. As images of what he suggested floated though my brain, like a pornographic movie, my panties grew wetter and wetter and by the fifth and final time—right before I typed in "Yes"—my pussy was aflame with need. His final message read, My cell number is 702–555-1243. Call me!

Be the first to review “SLUT! by La Marchesa” Cancel reply