You are here: Products Slow Burn by M Caden & A Grayling 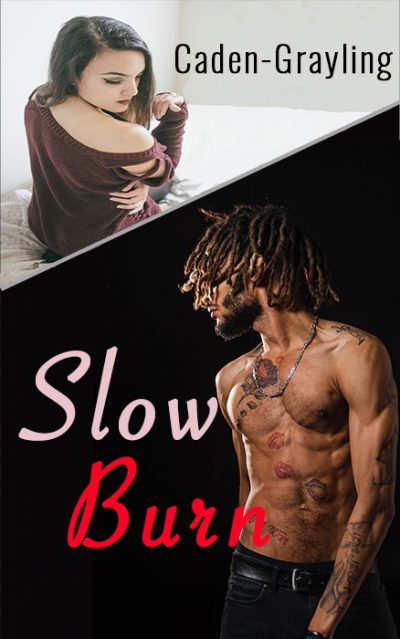 My best friend quotes music like it’s a second language that only we share. He’s my go to guy for jokes and inspiration but, our relationship has been evolving into something so beautiful it terrifies me. The need I feel for him is like a constant slow burn. Now, he wants me to embrace this change.

He wants me to be his.

But, I’m not ready to be consumed by a perfect love. Who gets that? It’s not real. When has life ever been perfect? That exquisite slow burn always cooks you in the end.

Since I can’t lose him, I’m struggling to take this chance. On him. On us.

Confession Time: Slow Burn is a MF standalone novellette of 10,000 words. HEA with no cheating and a mostly wicked cool playlist (forgive us for the Beaches throwback).

Maya Caden feels the same way about romance as she does about fajitas—they better be scrumptious, sizzling, spicy and leave you satiated. Maya’s heroes range from the easygoing sensitive next-door neighbor to simmering Alpha males. The one thing her men have in common is the ability to charm and please the pants off the smart strong woman or man that has caught their eye. The stories are all HEA or HFN when the heroes meet their match in Maya’s leading ladies, who are loyal, kind, and not afraid to kick some ass.

When Maya’s not writing, you’ll find her hiking or traveling with friends, a notebook in hand, ready to capture ideas for her next story.

Adrienne Grayling loves romance, especially when its hot and steamy. While her heroes are rugged and masculine, they are not afraid to show a sensitive side. Her heroines, too, know what they want and grab it, sometimes in twos, threes, or more at a time.

Adrienne is a voyeur on life, a hedonistic lover, a collector of fantasies, and when she’s not exploring some far flung place; spending time in the company of friends; or writing her novels, she’s in the bedroom exploring fantasies of her own.

This book is about what might have been possible with the one I (Maya) was too chicken to take a chance on. Of course, the characters are completely fictional, but the exploration of crossing the boundaries between best friends and lovers is very real. I wanted to look at what could have happened.

“It was too perfect of a painting shirt to give up. All the rest of the clothes you donated did, actually, go to the charity.” I shrugged, the shirt lifting with my shoulders.

“Thanks.” I shuffled from one foot to another switching the topic out of self-preservation. “You didn’t nearly break my door down to discuss what I’m wearing. Are we having a BBQ?”

“Yes, you free tonight? I’ve got two steaks, one with your name on it.”

“I’m in. I’ll bring wine…” I leaned up on tippy toes, reaching both arms, and grabbing a bottle from my wine rack at the top of the fridge. I realized my mistake with his audible intake of breath as the cool air hit the back of my thighs reminding me that I was in nothing but his shirt and panties. He’d just gotten a view of those panties. Good thing they were super cute and lacy. I groaned eternally. My mind should not be grateful that my panties made my ass look good. That was not a “we’re just friends” thought.

“And yourself, in my shirt, exactly as you stand before me,” he said, finishing my statement with his famous flair for double entendre. Elliot’s voice had lowered and the timber hit me right between the legs, my nipples, never ones to be left out, joined the reaction party.

“Down boy. You know that ain’t happenin’.” I placed the bottle on the counter before me, keeping myself in profile to hide my reaction. My thighs squeezed together in an attempt to stamp out the raging desire that left me ravenous for the feel of his hands all over my body. I hit the counter with my palm in an effort to clear my head.

“A guy can dream.” He placed a hand on the door as if reaching out to me to sooth my internal struggle.

“You keep doing that.” The truth was that if I knew we would work out together I would have been his months ago. My heart beat for him, but my head said that he would get bored, he would eventually let me go and then I would have nothing, be nothing but a broken shell of myself. The chance, when it went sour, would shatter me.

“What, my love ain’t enough?” My breath caught with anticipation until I realized he was referencing my painting music playing in the background–not making a declaration. His love was more than enough. I knew this to be true by the way my heart skipped in hope with his words, I pretended to ignore him and studied the bottle. “It’s a Merlot.”