You are here: Products Sleepover Seduction by Kaylee Mason 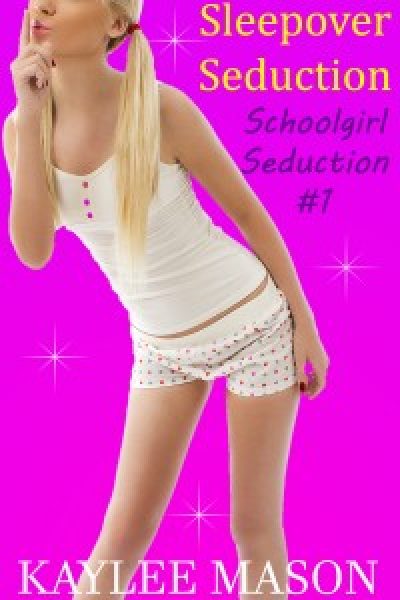 When her best friend invites her for a sleepover, Hannah quickly accepts. The young woman has had a crush on Mr. Harrison for months. Ever since seeing him without a shirt at a pool party for her 18th birthday, she knew she had to have him.

Armed with only a cute pair of pajamas, the younger woman knows this is her chance to seduce the older man. She may be inexperienced, but Hannah knows that if her seduction works, she’ll be in for the ride of her life!

Will she be able to convince the much older man, using only her cute looks and charm?

Like everything in my life, I love to keep my writing light and fun. I often realize that I’m putting a little of myself into each of my characters, but everything is 100% fictional. Hopefully you find something you like. Happy reading!!

I watched as his eyes quickly scanned what I was wearing. I could tell he liked what he saw, and he looked away hastily. I had on a short white tank that covered just over half of my stomach and an old pair of white shorts with rainbow polka dots. I hadn’t expected anyone other than Alex’s mom, so I had already taken off my bra. I had an evil thought, so I slid down further on the edge of the couch facing my friend’s dad.
“So what are you watching?” I asked, trying to sound interested. I always felt like such a kid when I talked to him, but I told myself that we were both grown adults and I was certainly able to hold a conversation with him.
Mr. Harrison looked up at me. I watched him do a double take as he saw how I was sitting. I was half-sitting, half-standing on the edge of the couch. I had a leg bent and straddled over the arm. It wouldn’t have been an unusual position any other time, but I knew he could see right up my short little white shorts. I figured he was getting a nice eyeful of my bright yellow thong.
“Uh just trying to find something good. There’s nothing on right now,” he said as he regained his composure and turned back to the TV.