You are here: Products Skinny Dipping by Alicia M Kaye 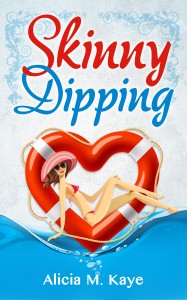 Sophie drowned as a child. She died for three minutes. Her childhood trauma is real.

Yet Sophie Smart, hot-shot advertising executive, isn’t a child anymore. Now Sophie’s most important client, handsome Matthew Silver, is insisting she learn how to swim. She can’t blame him really – he’s the owner of a chain of swimming centers, and Sophie’s in charge of his new advertising campaign.

The last thing Sophie wants to do is get in the water, in a clingy swimsuit, with a client she’s trying to impress. She’s not going to win him over flapping around like an idiot, is she?

But with a broken heart from her last relationship, maybe getting into the pool is just what Sophie needs? Maybe Sophie can trust Matthew with her fears. Maybe she can let go. Maybe it’s time for Sophie to forget about her past and take the plunge?

Next in the Skinny companion adventures is a story about Michelle Vermont (her nickname Mickey), in the novel Skinny Cappuccino. Please email Alicia or look out for its release in the Kindle store in May 2014.

Swimming is of course a life long skill. I hope people will enjoy my book, but of course, for those who can’t swim, they might consider dipping their toe in the water. My book explores the phobia / deep rooted fear which faces adults who can’t swim and from the bottom of my heart, I hope to encourage people to learn. The intention of my book is to use humour, and of course romance to explore the topic – and I truly hope above all that you enjoy the book.