You are here: Products Siren’s Wave by J.A. Hazel 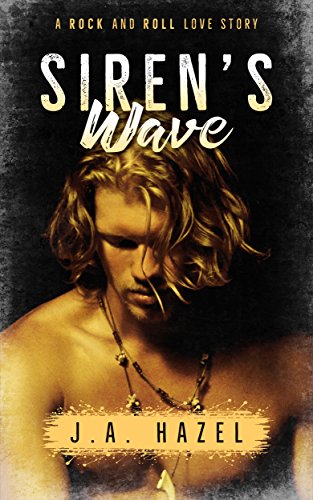 J.A. Hazel, author of Siren’s Wave – a rock ‘n roll love story, lives in Melbourne, Australia. While working in band management, at entertainment agencies, and a record company she collected colorful and sometimes frightening fodder for stories. She likes to idle away hours dreaming of beautiful, damaged rockers and the girls who try to save them, but mostly, she spends her time writing about them, listening to angst-filled music and, unfortunately for her family, singing along loudly.

Working in the Australian music industry I met many a lost boy reeling out of control. I wanted to read about one of these hapless lads – saved from himself and the trauma of his past, by love. I adore stories wherein the hero has no clue he’s not only falling in love but falling hard. They’re not easy to find – so I wrote one!

Partial Chapter – Hungover
It wasn’t the cruel beam of light raying in through a gap in the curtains that woke Bran. It was the jolt of an intense heat slamming into him, that did it. He was pissed. It couldn’t have been more inconvenient. Here he was in bed alone and surrounded by his sleeping bandmates, needing to rid himself of a ridiculous burning lust like he was sixteen. He reached down to the floor and fumbled around in frustration. He picked up his wallet, jeans, sunglasses, and finally snagged a t-shirt that would work alright for the clean-up.
Hoping the need would go away, he lay on his back with one hand pressed over his eyes and the other heading down south at the ready. He tried, but he couldn’t ignore it. Hard as steel and primed, he needed to detonate.
Even as his hand went fast at it, he felt uninspired, restless, and freaking mad at his body. How could it burn so hot, but not go anywhere? He wanted it gone. Fucking now, already. But why did his brain keep interfering? Stop him from getting into the flow. Shit. He wanted to punch himself in the face.
Frowning, he reckoned the power of the urge came from it being sparked by the girl at the pub last night, then doused in Ava’s cold water stare before it could burn out of his system.
Water. Ava.
And bang! His mind locked on to a wide screen picture of her coming out of the waves wearing her granny bathers, dripping drops of surf and wringing salt from her hair in rhythmical squeezes. She was succulent, lush, and nothing like the girls he hooked up with back home. He froze, opened his eyes, stunned that his thoughts had landed on her when he had his dick in his hand. But hell, now he recognised this feeling. Painful as it was.
In shock, he was flung back a week to the ice rink, coming down from his laughing fit at Dave’s classic collision to find himself wrapped around her, stupefied by the feel of her pressed against him. And that mad bolt of lust he’d felt as he searched her over for injuries. Man. Wild with fury, he’d snapped at her and skated away, running the chord progressions of ‘Dissolve’ through his brain in an effort to cool his blood.
And then yesterday at the beach, he’d been dumbstruck watching her struggle to get her dress on over all those curves and couldn’t have looked away to save his life. When she’d seen them all drooling like a pack of hungry hounds and given them a black look of outrage, he’d just kept right on staring. Her angry words, did the job, though, waking him from his lustful daze like a sharp kick to the balls. At the time, he was appalled with himself.
But he wasn’t appalled now as her image sharpened into perfect focus and something incredible dragged through his stomach. Then he was off, strapped in on a wild ride that felt dangerous, and wrong. He could hear a sound like an animal. A fucking bear or something, getting louder and louder. And all of a sudden, the bear roared and blew into fragments. Gone. And thank fuck, finally, it was over.
Through the noise of Bran’s harsh breathing, Zavier complained from the bunk above. “Jesus H. Christ, Bran! What the heck was that? You can just forget about ‘King of the Silent Spenders’, you’ve forfeited the title with that fucking racket, dude.”
“Shhhh,” Bran managed, flinging an arm over his eyes.
“You shhhh. What the fuck were you doing? No, don’t answer that!”
Yeah, good question, what the hell was that?
Bunking together on the road, they were all pretty good at releasing the tension without a sound, but that bit of madness had really been something else. What was wrong with him? He turned his face into the pillow to muffle a laugh. No need to wake anyone else yet. The sun was still low.

Be the first to review “Siren’s Wave by J.A. Hazel” Cancel reply