You are here: Products Siren’s Sin by Audrie Rain 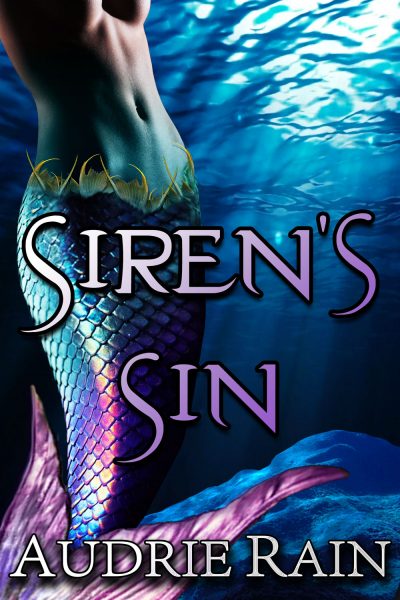 Rafe doesn’t believe his best friend when Ben swears he saw a mermaid in the water. He needs to see her for himself.

Rafe is convinced Ben imagined it all when he finally sees her. Caught in the fantasy, they risk losing their jobs and their sanity to spend every moment at sea trying to befriend her. But Rafe needs more. Fear that some other fisherman could stumble upon the secret, Rafe becomes determined to capture her. He realizes he will stop at nothing to possess the beautiful creature. He needs only to convince Ben to help him.

Rafe commits the utmost betrayal to keep his mermaid confined in their secret prison. He risks his life to hold her captive to his lust, but this provocative goddess of the sea has a few sins of her own.

She lives in the Pacific Northwest most of the year with her greatest love and two spunky dogs.

She has a healthy or maybe not so healthy caffeine addiction and a deep love for the rainy days that help the characters spiral from her fingertips. She loves to build worlds where her characters can indulge in acts that most would deem merely a fantasy. Her writing naturally shifts to power struggles and dark desires.

My books are merely my own fantasies. With Siren's Sin, I felt compelled to write a wicked tale about a mythical/paranormal creature that was not the typical vampire or werewolf.

“Do you think she'll freak out when she wakes up?” he asked.
“Of course, she will,” I answered.
“Should we keep her in this position then? She's still pretty confined in this thing.”
“Yeah, but if we unattached the sides to let her sink, well… she'll sink. She should be fine underwater, but I don't know. This way she has two ways to breathe,” I said.
Ben nodded, sipped his beer, and checked his watch, “It's been a half-hour since we docked. Shit! The boat!”
We dashed down the stairs.
“You stay here with her,” he said, “I'll go take care of this, and I'll be right back.”
He ran for the truck, and I ran for the doors to let him out. I locked them behind him and ran back to the tank. I was breathing hard when I got to the platform. I picked up my beer and looked at my mermaid. She was looking back at me. I fell to my knees and leaned forward, “Are you okay? Don't panic. Don't hurt yourself.”
Dyoo
Her sounds came out a whimper. I wanted to hug her to my chest again and kiss her.
“I'll take care of you. You're safe here. When you're ready, I'll let you into the water,” I said.
Dyoo Dyoo
She was insistent now, aggravated. She lifted her head and looked around. She inhaled deeply and flipped onto her side. The harness that cradled her flopped about. The chains clacked together. She braced herself on one arm and glared at me. She fumed and gritted her teeth.
“I'm sorry. We had to. Others were going to take you. They were going to stuff you into a tiny cage and poke you with needles and run tests on you and do terrible things. We saved you. You'll be safe here. Safe with us. We'll take care of you,” I convinced myself the more I pushed into the story. I started to believe it.
She tried to crawl out of the fabric.
“Wait! I'll release it,” I said raising my hands to delay her, “I'll unhook them. Let me do it.”
I reached for the chain and pulled it close. I unhooked the latch at the top and placed the end into the water. I reached for the other chain and pulled it close. I knew letting this one go would release her into the water. I hesitated looking down at her. She looked so frail and pitiful, confined in our makeshift seascape, our secret prison, our own mermaid habitat. I knew she would hide beneath the water, in the seaweed, behind the rocks, deep in the shadows. She might choose to stay down there for days and stay away from us.
“Know we did this to save you,” I pleaded with her, hoping that she understood and maybe even believed me.
I unlatched the chain and let it sink. She slid into the water and was gone with a splash of her glistening tail. I dropped down and crawled to the edge of the tank to watch her. I saw a shimmer and brief glow from her yellow eyes, then nothing. I saw nothing but shadow. I searched for her until Ben returned. I picked up the empty beer bottles and climbed down to the ground floor.
“Is she okay?” Ben asked. His face was covered in sweat.
“She's fine. She woke up. She's pissed. I released her into the water.”
“How pissed is she?” he asked.
He followed me into the kitchen, “I'd say she's extremely pissed. I tried to convince her that we were helping her. That other men were out to get her and put her in some lab and turn her into a science experiment. I don't think she understands.”
“How could she? And we don't even know if that's true,” he said.
“Of course, it's true! The first man that saw her would do exactly that and with a team of others,” I snapped at him.
“Yeah, you're probably right. What do we do now? How long do we hold her here before we release her somewhere safe?”
I sighed and threw up my hands, “I don't know! I'm wingin' it just like you are. We'll have to play that by ear.”
We drank another beer in silence, then another.
We sat in lawn chairs beside the tank and hoped for a glimpse of her. Waiting to see her was not as agonizing as it was before. Now, we knew exactly where she was, and she could not leave us.
“Should we get some real fish to put in there? Some company? Or food? What does she eat?” Ben rattled through questions.
I stroked the scruff on my face. It had been days since I shaved. “Yeah. Some fish isn't a bad idea. Maybe she'll eat them. I wish we could just ask her.”
“I'll go buy some,” he chucked his bottle into the trash bin and headed for the truck. I helped him out the roll-up door and came back to the tank. I stepped up to the glass and placed my hand against it. Deep in the water, I saw the yellow glow and watched as it grew brighter. She swam toward me and hovered in the water. Her black hair was a swirl of shadow around her. I could barely see anything but her face, which held an obvious smirk.