You are here: Products Sire Bound: Part 1 by Edith Warner 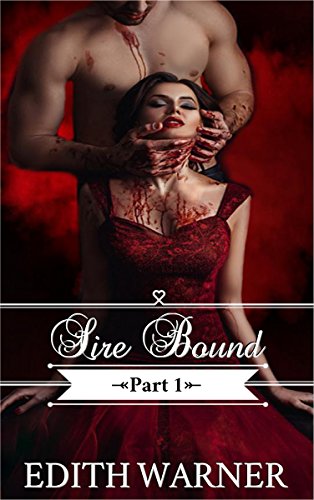 As a young nursing student, Selene Evans has a bright future ahead of her, but things take a radical turn when a vampire abducts her and forces her to drink his blood. The heightened senses, crazy emotions, and cravings pale in comparison to the drive of her newfound lust.

Not only does she have feelings for her kidnapper, the sire bond also forces her to obey his every command. To their mutual satisfaction, she craves to explore the fine line between pleasure and pain with him, and in the midst of it all, she begins to lose her sense of self.

Could her feelings for him just be a product of the sire bond? Only time spent away from his influence will tell, but there are forces so dark out there, they make her demon look like an angel in disguise.

The college girl looked so peaceful in her sleep. Her chest rose and fell with each breath, sending a heady sweet scent into the air. Wren brushed back the hair from her forehead, taking in the quiet moment before she would fight him with all of her might. She'd made a terrible mistake by leaving the window open. The screen could hardly be a barrier for something like him. He was a predator that was superior to anything human.
The girl moaned, capturing his full attention again. He didn't think that it was anything sexual, but it was enough to set him on edge. It had been awhile since he'd had new warm flesh beneath him, and the girl was ripe for it. He leaned in closer and took a deep breath; her feminine scent made his head swim with anticipation. The blood of the last girl had reawakened his most basic desires. He couldn't bear to wait for another second.
The pistol slipped quietly from the front pocket of his slacks. It was the best tool to use for these situations. People understood that a gun was capable of killing them in an instant. They didn't realize that about vampires, at least not usually. The more observant ones seemed to, but he didn't want to take any chances. He'd tried abducting women in the past with only his bare hands. It worked, but they struggled. That always ended badly for them. It was as quick as being shot, it just involved him snapping their necks.
He pushed the covers back with the end of the pistol. The girl woke, looking confused at first, and then her eyes widened as she distinguished his figure from the darkness. He muffled her scream with his hand. She was loud, too loud. It was enough to wake her roommate. He could hear her heartbeat accelerate in the other room.
Wren raised the pistol, showing it to the girl before snatching her from the bed. He carried her through the window before the roommate even made it into the hallway. It only took a couple of seconds to reach his vehicle. He made sure no one was around before throwing her into the trunk. It would be straightforward from there. People would be looking for her, but they would never find her. His home was nestled under the ground in the outskirts of Atlanta, which was six hours away from where she disappeared, and he sensed no witnesses.

Be the first to review “Sire Bound: Part 1 by Edith Warner” Cancel reply