You are here: Products Siphoners by Evan Bollinger 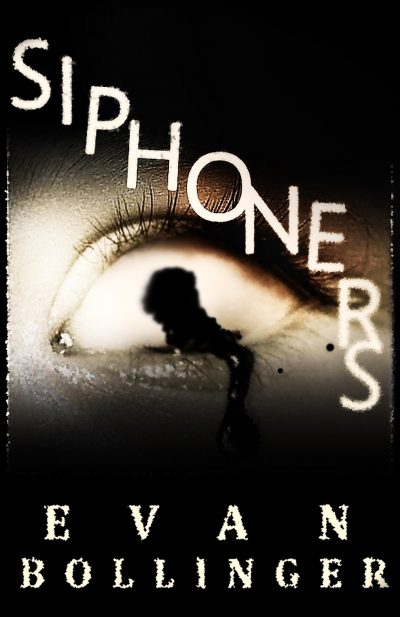 Four strangers cursed, blessed, tormented by a deadly secret. A darkness.
A horrifying truth now unleashed on the world…

But for Donovan, Seth, Avanti and Frederick, this is only the beginning. After years of silence in the shadows, the truth has emerged. Bodies are racking up, people are disappearing, and the authorities, strangely, seem totally detached…

The time has come.

Four strangers, united by growing clues, and a growing sense of someone or something pulling the strings at every turn. A figure. A past. An evil of ancient proportions…

The source of their problems, the origin of their natures, is waiting. Along with a nefarious plan, for a future nobody could have fathomed…

Evan specializes in a fusion of horror and scifi, opting for story-lines that challenge our perception of normal, everyday events and ideas. A lifelong fan of horror and dystopian, Evan continues to dream up the impossible. He is currently at work on his latest full-length novel, the sequel to "Siphoners."

I was mostly inspired by the possibility of other dimensions, worlds, and realities imprinted upon our own 😉

In minutes the Nissan GTR arrived at his apartment.
And then she was on him.
As they pushed through the fastidious bachelor pad and straight to the couch, Avanti could feel it fading. Vision spinning, fast, delirious, like a kaleidoscope cyclone—
It was never like this.
“Whoa whoa, how 'bout the bedroom?” He was half-laughing-half-fending her off, but groping her ass all the while. He probably thought he was really hot stuff. Just totally freakin irresistible stuff.
“No, this is good,” Avanti breathed. She slipped her hand to the spot already growing.
Chuck smiled. “Yeah you like that?”
“I do. Show it to me.”
He struggled with the belt.
“Forget it.” In a second she zipped down, reached in, and withdrew. Half mast already
“Yeah,” he said, with a grunt as she began. “Just like that.” He put his hands on his hips. He grimaced then grinned, whispered then cursed, watched and watched and leered. “Shit girl… don't stop…” He groaned, his peak coming fast. “Yeah yeah yeah yeah…” His eyes were up in his skull, face flushed. “Come on…”
And then he tensed.
But the moment frat-boy Chuck felt the familiar lurch and impending blow, it stopped. His mind froze as his breath caught—and the head between his legs drew sharp.
Like every time before and every time to come, Avanti Sendall inhaled. Like a swell of Autumn air it came, filling her lungs, her blood, her soul with life. Before his body, went stiff; warm muscles now cold; bronze flesh, now pale.
By the time Avanti resumed her feet, the dimmed lights were fuzzy. She knew what to expect but this… her heart racing suddenly with something different. The peak from this one was clearly floaty too, like wings on water. She was warm and confident and stupid all at once.
But something was wrong. Because the guy named Chuck was un-moving. Not just un-moving, but changed. Transformed. His once carved physique all pasty and shriveled, the blood spattered about his chalk-white flesh now dribbling to the carpet below…
… as those eyeballs slipped loose like raw eggs…

Be the first to review “Siphoners by Evan Bollinger” Cancel reply