You are here: Products Singleton by Luke Mallory 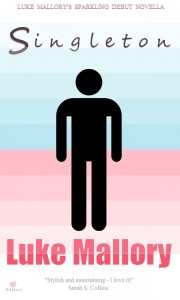 Ever since he was a boy, John Singleton has had only one goal in life: to not be single.

John is a just a piano-playing kid with a kind heart when he meets Catherine, his first true love. After she suddenly moves to another city, John struggles to find a balance through his teenage years as his quest for love is joined by lust. On the verge of failing his high school diploma, he bounces back into life and love. But not for long. Following a string of disappointments in his twenties, John’s kind heart becomes a broken and bitter one as he embarks on a series of meaningless flings.

Just when he is ready to give up on love, fate offers one final twist to achieve his goal…

A fan of Girls, Guinness, Rugby, Girls, Nightclubs and Dayclubs if there is such a thing, Luke Mallory’s modus operandi is to make the most out of life. If he can make a few others smile and laugh at the same time, then it’s all the better!

Basically it’s a composite of my love life, and some of those who are closer to me. I reckon a lot of people have gone through something similar..!

Be the first to review “Singleton by Luke Mallory” Cancel reply