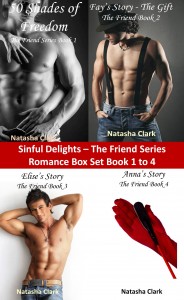 Anna is the friend and each of the women in these books will be changed by her friendship.

Book One – 50 Shades of Freedom – Jude must discover who she really is to save herself from poverty. Can an indecent proposal be the answer to all her dreams or is it the beginning of a nightmare.

Book 2 – Fays Story – The Gift – Fay is devastated by the death of her grandmother and the last thing she is looking for is romance. Drake a gorgeous stranger turns her life upside down when he tells her something that must be a lie. Will she follow him and discover her true identity or will her temper get the better of her? Fay must be careful for someone wants her dead and only Drake can save her.

Book 3 – Elise’s Story Escape – Elise has had the hots for gorgeous billionaire boss Joel Sakharov since she started work for him. On a date she loses her virginity and then is devastated because to him it was just a fling. She run’s home to start her life anew only to find he follows. Will she be won over by his charms or will her ex best friend David finally get what he always wanted?

If you like romance that will steam up your windows and leave you wanting more then you will enjoy her books.

I love romance and erotica but the way women are treated in some books just left me cold. If anyone’s doing the spanking then let it be me.

Be the first to review “Sinful Delights Romance Boxed Set: The Friend Series Book 1 to 4 by Natasha Clark” Cancel reply