You are here: Products Sinful by Katherine Hawthorne 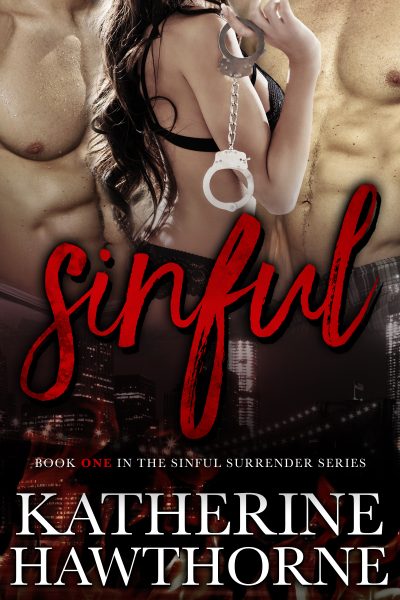 Xander was a dream that would never be.

One catastrophic night left me orphaned at the age of seventeen. Hunted by a murderer, Xander saved me from the pits of hell, braving a fire that would have ended my life. Hiding me from a killer, he became my protector, my best friend, but never anything more.

Sin was a nightmare waiting to happen.

Six years later, a friend is murdered at the hottest nightclub in Manhattan, again thrusting me into a killer’s crosshairs. Now a detective with the NYPD, I refuse to hide, unyielding in my pursuit of justice, which has eluded me for so long. Determined to keep me safe, Sin forces me from the case. Defying him at every turn, our contentious relationship finally explodes in the most scandalous way conceivable, leaving me devastated.

I wanted them both.

Xander, sophisticated and elegant. My hero, the man who owns my heart. Sin, dominating alpha-male. My lieutenant, forbidden in so many ways. One dangerous kiss changes everything, catapulting me into a war between the two, neither of them willing to let me go. I become a pawn in their game until they join forces in a way I never saw coming. But lies and deception threaten to destroy us, leading to a betrayal that cuts so deep, I wonder if I’ll ever survive.

AUTHOR’S NOTE: This book is intended for mature audiences due to explicit language and sexual content and is perfect for fans of Lexi Blake’s Masters of Ménage fans. Sinful is all about the girl. There are NO M/M scenes.

Katherine Hawthorne loves sexy alpha males and books that come with warnings, which is exactly what she writes. Throwing out the last vestiges of her oh-so-proper Ivy League education, she traded tedious academic writing, combined her favorite genres, and found her greatest joy in writing romantic suspense.

When Katherine isn’t writing, you can find her racing down the ski slopes in the winter and relaxing on the beach in the summer, most likely lost in a book. Married with four children, three of which still live at home, life is a never-ending crazy thrill ride, one she quite happily embraces.

I have been an avid reader and writer my entire life. I wrote my first novel nearly twenty years ago but never did anything with it. About three years ago, I began thinking about that book I had still sitting in the bottom of my nightstand and finally dusted it off. Yes, I had to re-write the entire thing as some of it was cringe-worthy. But I did it and Deception was born! While I was writing Betrayal, the sequel, I felt the books would make the best MFM romance, which led me to the Sinful Surrender Quartet, which I have just recently completed. It has been a wild and crazy ride but I am so excited to finally be living my dream!

Be the first to review “Sinful by Katherine Hawthorne” Cancel reply