You are here: Products Shrew & Company Books 1-3 by Holley Trent 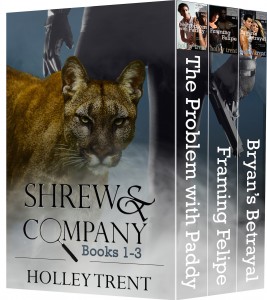 These women won’t run from a fight…or true love.

Meet the ladies of the Shrew & Company private investigation agency in these first three installments from the sexy, action-packed paranormal romance series.

The Problem with Paddy

After an unregulated research trial warped her DNA and turned her into an honest-to-goodness mutant, detective Dana Slade became an unwilling initiate into the mysterious paranormal world. The new were-cat Patrick O’Dwyer could be the perfect partner Dana didn’t know she needed, but not if she can’t convince herself that another chance at love is worth the risks.

Sarah Miller isn’t interested in a relationship with a man who cheats death for a living, but something about Felipe Castillo has her enthralled. Perhaps it’s because the handsome acrobat seems to have just as many secrets as her…or even more.

Were-bear lieutenant Bryan Ridge needs Shrew & Company’s help in overthrowing his group’s Alpha, and investigator Tamara Ursu has all the right qualifications for the job. She can help him if she can get past the wealth of distractions. Bryan’s bear is sniffing around for a mate, and for some strange reason, Bryan makes Tamara sick. Literally.

Want to chat with Holley about her backlist titles or any other thing? Email her at holley [at] holleytrent [dot] com.