You are here: Products Shot Through the Heart by Andrea Downing 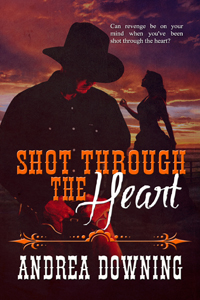 Shot Through the Heart by Andrea Downing

Gunslinger Shiloh Coltrane has returned home to work the family’s Wyoming ranch, only to find there’s still violence ahead. His sister and nephew have been murdered, and the killers are at large.
Dr. Sydney Cantrell has come west to start her medical practice, aiming to treat the people of a small town. As she tries to help and heal, she finds disapproval and cruelty the payment in kind.
When the two meet, it’s an attraction of opposites. As Shiloh seeks revenge, Sydney seeks to do what’s right. Each wants a new life, but will trouble or love find them first?

A native New Yorker, Andrea Downing currently divides her time between the canyons of city streets and the wide-open spaces of Wyoming. Her background in publishing and English Language teaching has transferred into fiction writing, and her love of horses, ranches, rodeo, and just about anything else western, is reflected in her award-winning historical and contemporary western romances.

She has been a finalist in the RONE Awards for Best American Historical Romance twice, placed in the International Digital Awards twice, and won ‘Favorite Hero’ along with Honorable Mentions for Favorite Heroine, Short Story and Novel in the Maple Leaf Awards. Her book, Dearest Darling, has also won The Golden Quill Award for Best Novella and been on the short list for winning The Chanticleer Award for Best Short or Novella.

Like many people who love the West, every year I try to find a pertinent calendar with photos of either wildlife, or western scenes, maybe national parks, and so on. One year I had a ‘Cowboys’ calendar and there was a handsome gentleman named Shiloh Coltrane. I thought, what a wonderful name! I must use that for a hero in a book. And so it began…