You are here: Products Shattered (The Circle of the Red Scorpion Book 1) by Charlene Johnson 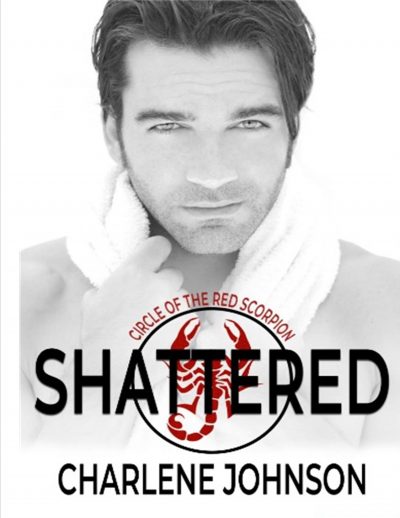 Drake Devereaux, haunted by a tragedy in his past has avoided the trappings of love most of his life.

Ebony Jordan is a romance writer who wants to find the kind of love she writes about in her books – the love story her parents never had.

Solomon Blackwell, a Rogue vampire sees Ebony one night and is reminded of the lover he lost and vows to make her his own.

Drake and Ebony meet by chance and forge an unforgettable connection. As Drake and Ebony’s relationship heats up, Drake realizes he’s falling in love. Instead of embracing it, he allows his fear to drive him away from the one woman who can heal him. After months of being apart, Ebony’s attempt to reach out to Drake ends with a heartbreaking discovery and an unexpected accident that nearly ends her life. Faced with another tragedy, Drake finds out what is truly important. As Drake and Ebony plan a life together, Solomon plots to possess her and shatter their love forever.

Charlene lives in Sacramento, California. She is married and has a son, a daughter and four grandchildren. She graduated cum laude from Waynesburg College with a bachelor’s degree in liberal arts.
Books have always been her passion. She started reading at an early age and progressed to full-length books by age nine. The first supernatural book series she read was Dark Shadows, and it sparked her interest in all things paranormal, with a spicy touch of romance mixed in for good measure. She also started writing poetry in grade school and continues to do so today. Being an avid reader, the consummate daydreamer and an incurable romantic with a Cinderella complex, she started creating her own characters and storylines because she realized she had her own stories to tell. She’s traveled the world, crossed galaxies, traveled through time and explored history on the pages of books.
She is an author with Kingston Publishing Company and has published three books so far in her erotic paranormal romance series Circle of the Red Scorpion. She is working on book 4 in the series and is also writing book 1 in a romantic suspense series Sterling Woods.
Besides reading and writing, she also enjoys photography, travel, music, and great movies.

I’ve been an avid reader since age 9. I love books, and I love all things paranormal, especially vampires. I watched the Dark Shadows soap opera every day with my grandma. Dark Shadow was the first book series I read during that time. Over the years, I’ve read countless gothic and paranormal romance books and book series and wanted to try my hand at writing my own.

Prologue
Broderick Devereaux stared out at the Seattle skyline from the top floor of the swanky, state-of-the-art office building that was the headquarters to his private detective agency, Devereaux Investigations. He was the only one left in the building, except a security guard stationed in the building lobby and the cleaning crew. He owned the forty-five-story building, and his agency occupied the top two floors. He rented out the remaining forty-three floors to a variety of local businesses. During the daytime, his agency employees met with potential clients, conducted background investigations for local, state, and federal agencies, dispatched private detectives to conduct interviews, and set up surveillance operations. At night, after all his employees and the other building tenants departed, he led clandestine meetings with members of an elite team, unknown to the rest of his agency.
The team would be arriving soon. He was more on edge than usual. Solomon Blackwell was in Los Angeles again. It was the third time in a month. What was he planning? Broderick’s son, Drake, was also in town, doing interviews on local radio stations and appearing at local music outlets to meet his fans and sign autographs. He was going on tour in Europe early next year, and his business manager, Chase Sinclair, had him doing guest appearances across the country promoting the new CD he was set to start recording after the holidays.
He hated Blackwell being in the same city as his son, but it couldn’t be avoided. Chase and Solomon had mutual business acquaintances, and they both attended many of the same social functions. So, did his son on occasion. That put Solomon in close proximity to his son and could put him in danger. He didn’t want that bastard anywhere near him. Solomon Blackwell was more dangerous than most people knew. The select minority who did know his secret kept it to themselves or died violently. He was a Rogue vampire with power and influence. A preternatural sub-species considered inferior in the vampire hierarchy because they were turned, not born. The Rogues swore no allegiance to any vampire organization, especially not the largest and most influential—the Sacred Order of Simiel, an ancient sect of Pureblood vampires who were born not turned.
The Order was headquartered in Italy and their reach was far and wide.
Solomon and his gang of vampires committed violent and often deadly crimes for more than three decades that Broderick knew of. They were never prosecuted for those crimes, and it was likely they never would be. He had tried for years but could never break through the roadblocks expertly crafted by the rich and powerful vampire. His influence was far-reaching, his close-knit group impenetrable.
His hatred toward Blackwell was personal; Blackwell had single-handedly destroyed his life, and he was determined to prevent him from doing the same thing to his son. Drake was all he had left. Thus far, the vampire had done nothing to harm Drake, but he watched and waited, because he knew someday, Blackwell would invade his son’s world. He didn’t know how yet but when he did, he and his team would be ready.
He heard the elevator ping and knew his team was arriving. One by one they appeared and greeted him as they proceeded to the entrance hidden behind the wall of law books he had kept from his years in the King County District Attorney’s Office, and down the mezzanine stairs to the command center. Only he and his team knew of the large fully equipped space hidden between the forty-fifth and forty-fourth floors.
When the last team member arrived, Broderick followed him inside and pressed a button for the wall of law books to slide back in place.
He sat down at the large circular conference table made of dark cherry wood. In the center of the table was the insignia of a large red scorpion inside a circle inlaid with black onyx . He looked around the table at the four men, who were waiting quietly for him to begin.
“Gentlemen, did you find out anything new on Blackwell?”