You are here: Products Shamelessly Taken: A Den of Sin Vignette by Mel Blue 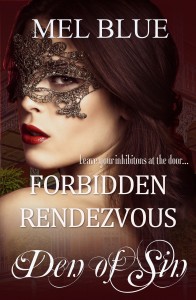 Shamelessly Taken: A Den of Sin Vignette by Mel Blue

When the Beaudelaire Hotel turns into a Den of Sin for the New Year’s weekend, any and every fantasy can become a reality…

Layla Gunn booked a single night in the infamous hotel for a chance to remember what it’s like to be wanted and wanton. The last thing she expects is to come face to face with an old friend from college. Can she still live out her fantasy?

Christopher Trevino is ready to move past his grief, but he can’t seem to find comfort in just anyone’s arms. So when he walks into the hotel room and sees his former classmate, he can’t help but feel this meeting was destined.

One night turns into the next morning. Can they walk away or will they find more than a night filled with passion?

Outside of writing, Blue works as a mail clerk for the federal government, has a paralegal certificate (that she has more use for as a dust pan) and is a mother of two rambunctious children. She lives in California where the wine is good and, despite popular belief, is not always sunny.

This particular short came about between Holley Trent and I. We wanted to give folks a free sneak peek into our world. So we did a word duel. I thought it would be fun to have a couple who knew each other way back, had crossed that friends-only boundary and had disastrous results.

She made another attempt to steady her breath, but that didn’t work. Nothing likely would because just being at this hotel, during New Year’s Eve, was insane. She focused her gaze out into the night. Oaks stretched before her, bowing against the dark sky. Farther out she could see the lights of New Orleans. The Beaudelaire Hotel was set back far from the main road, discouraging any unexpected foot traffic.
She tried to take it in but all her mind could stick on was what am I doing here? A week ago she’d received an invitation to stay for the weekend. An exclusive event deemed the Den of Sin. She’d thought her sister had sent it as a joke. Hell, she’d needed laughter in her life, but when she called the phone number that came with an application and other official-looking documents, the woman on the other end sounded professional. The woman, Ms. Gibson, had been patient and dealt with her disbelief. Before Layla knew it she’d booked a night and had sent all the medical history they needed for her to participate in no-strings sex.
Where your most intimate fantasies can come to life.
That had been the promise in the invitation.
This time when she inhaled, the scent of New Orleans soothed her. She could smell the water, the dormant honeysuckle that was trailed along the balcony, but there was something else she couldn’t quite put her finger on. A familiar fragrance that always made her stomach flip. No. Not the scent of New Orleans. The scent of a man. She gasped and turned toward the door. That man stood in the shadows. She hadn’t even heard the door open.
“Christopher Trevino?” Her voice was barely a whisper, but his gaze found her in the darkened room.
She’d only left the side table’s lamp on and hadn’t dared to sit on the sea-sized bed with a wide white canopy for fear of looking too eager for sex. She didn’t want to look too posed either so she vetoed the idea of sitting on the Victorian couch detailed with white stripes. She’d barely managed to scrounge up the courage to shower and get undressed.
But now…she tugged the belt on her robe tighter, feeling exposed and stupid for even being here. Curiosity got the better of her. She edged toward him to better see his face.
Six years had passed since graduation. His jawline jutted out in the same sharp, masculine curve she remembered. His dark brows furrowed, but an emotion she couldn’t pinpoint flickered behind his hazel eyes. The top three buttons on his crisp blue shirt were unbuttoned, revealing the hint of hard muscle beneath it. Six years, and still he radiated a quiet strength that drew her gaze to him and only him.
“Layla,” he said, his voice deep and husky. His tanned skin glowed beautifully in the dim light.
Her nipples peaked beneath the robe, but then Layla remembered why she was there. A month ago, her only fantasy involved walking down the aisle to her boyfriend of two years. She’d thought Raphael would finally pop the question and that they’d spend the rest of their lives together.
That fantasy had burned to cinders when she’d dropped by his office for a surprise, romantic picnic. Instead she’d found him with his pants around his ankles and his secretary spread-eagle on the desk.
So a few weeks later, when she had held the invitation, she’d known this was her chance to forget another failed relationship, the brunt of betrayal. For one night she could feel sexy and wanton and wanted. She could go back to her life and face the pity if for one night a faceless stranger looked at her with lust. But seeing Chris, here…she hadn’t signed up for someone she’d call a long-lost friend.
Heat suffused her cheeks. “I think they’ve made a mistake with your room,” she stammered and started for the phone on the side table. It was far away from where he stood, where he was taking up too much space in the luxurious hotel room. He grasped her arm before she could pass him. Her skin prickled with goosebumps and an achy warmth started between her legs.
“Look at me,” he demanded and shifted in front of her.
Her gaze clashed with his and she held her breath. Lust. Exactly what she’d craved to see in her lover for the night. Right there. Ripe for the taking. Had he ever looked at her like that before?
Yes.

Be the first to review “Shamelessly Taken: A Den of Sin Vignette by Mel Blue” Cancel reply