You are here: Products Shadow King by Lynn Landes 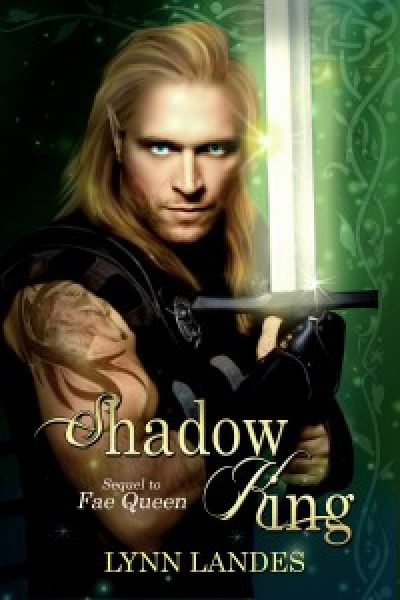 Fierce, Immortal, Lethal. He is the Shadow King…

A sinister darkness is seeping in from all corners of the Earth. Gifted with phenomenal powers by the Fae Queen, Reese leaves the realm of the Fae as the first Shadow King. His orders, to protect humanity from this new threat.

Ariana is of royal lineage. She sacrificed everything in order to protect her people, but who would protect her? Wounded and weak she hides in the shadows, evading the demons who once called themselves, Fae. The poison is spreading and she is on the run, sick and lost in the obscurity of the night. Her only hope is to fade before they catch her and use her blood to enter the Vale.

But fate has other plans…

The Shadow King has caught her scent! Will he get to Ariana in time? Can he stop the Dark Fae from igniting a war? Will this Fae- tale have a happy ending?

Lynn Landes is the author and independent publisher of The Angel’s Covenant Series, Fae Queen, and New Release Shadow King. Her stories span the spectrum of Romantic Fiction from paranormal, romantic suspense to Christian fantasy. If you like fantasy, fairytale, temptation, and adventure be sure to check Lynn’s blog for upcoming titles.

Sequel to the Fae Queen. I loved the character of Reese so much that I decided to give him a fairytale story of his own.

The Shadow King is hunting one of his own. It really is not that hard to catch a fallen Fae. Tonight Reese hunts in the streets of Dublin. Lucky for him, he does not hunt alone. They have tracked this one for months, following his bloody trail across Ireland. He hurts humans for sport. Sometimes, he lets them live, but they are never the same after the attack.
The Fae are elemental beings with supernatural abilities, some call them fairies, while others call them fallen angels. Humanity drove them to create a protective barrier, called the Vale. Once a Fae leaves the Vale for the human world, they lose their magic. They begin to age and some develop a taste for human blood. Not all shadows are evil, some choose to stay outside the Vale and protect humanity, as Reese did.
Reese blocks out the noise from the crowded street. Tourists, street performers, panhandlers and pickpockets roam the streets. He focuses on the scent of the elemental as he flows down the cobblestone streets searching for his victim. His team is in place. They are three well-trained warriors, handpicked by the Shadow King to seek and destroy those who harm others. Now they wait for the bait.
As if on cue, Kathleen O’Haley stomps down the street, with murder in her eyes. Construction crews have blocked the street her café is on, and the noise from the jackhammer is deafening. The crew begins ripping up the damaged red cobblestone walkway. Some break up the bricks, while others toss the pieces into a wheel barrel.
Concrete barriers are set up with caution tape blocking the street. Two construction workers guard the barrier to make sure no one crosses the work zone. The street is a popular tourist destination and Kathleen is the owner of Katie’s Chocolate Café, a café that specializes in coffee and pastries.
Reese watches from the shadows, pulling the multi-layer shades around him like a cloak, making himself invisible to the naked eye.
“She is angry, my King.” Reese hears Duncan say in his mind. Duncan has ability to manipulate air. He can cross great distances in an instant.
“Good, her fury will entice him.” Samantha replies. She is Duncan’s mate and the soothsayer who predicted the victim. Unfortunately, she can only see short distances into the future. They hope that it will be enough to save Kathleen.
Katie seems oblivious to the danger she is in; she only knows that she is losing money. Her arguing is pointless and she blows back to her shop in a hurry. As she passes Reese she looks directly at him, slowing for a moment then keeps going.
“Well, if the customers can’t come to us, then we will go to them.” She orders the two cashiers behind the counter to fill up trays and go sell them outside. “We can make this work, girls. I will man the shop. Hurry now, time is money.” Tossing her long blonde curls over her shoulder, she watches the girls leave.
With a sigh, she looks around, suddenly chilled. Katie hurries to her purse and reaches inside, when she hears a male voice say, “You won’t need that, Katie.”
Confusion fills her mind as she drops her grandmothers cross. It was a token from her granny to protect her from spirits. “I don’t need this.” She says aloud.
“You should close the shop today, Katie. The construction crew will be here all day, and I want to play with you.” He says brushing her hair back from her face. Katie struggles to move. Eyes wide open; she watches the demon appear in front of her. Sweat breaks out on her body as she fights his mind control.
His beauty repulses her, for she can see past the glamour spell he wears. He is not what he appears. When he smiles, he reveals two rows of sharp white teeth and he leans close, savoring the aroma of her fear. “Pretty Katie, I’ve been watching you for some time.”
Katie lashes out and strikes him in the throat. The force of the blow sends him across the shop, crashing through tables and chairs. Nyssa gives a shake and frees herself from the image she holds. Shape shifting weakens the physical body and Duncan moves through the front door with Sam to assist her. In a blur of movement, Duncan attacks the Shadowed Fae while Sam hurries to help Nyssa.
“He will try to flee through a body, Duncan.” Sam tells him.
Baring his teeth he lunges for Duncan slashing at him with long black fingernails. Duncan kicks him straight in the chest and sends him flying back into the wall.
“Where is my Katie!” he screams at him spraying spittle.
Reese comes through the back of the shop and with a thought locks the front door. He draws on his power and sends cuffs of light straight at him pinning him to the wall. He is unable to move frozen, in spot by Samantha.
“Gallus, I am Reese, the Shadow King. You have betrayed your people, and shamed our race. You are guilty of murder. Do you have any last words?” Reese asks.
“Shadow King!” he laughs. “You do not know the…”