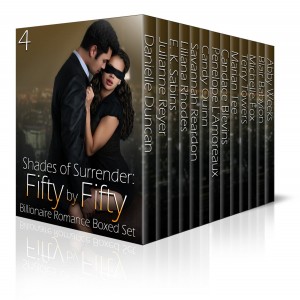 Dominant and uncompromising, these alpha males expect a lot from their women. Will they get the surrender they’re looking for?

Join us for thirteen smoldering tales of alpha billionaires and the curvaceous, delicious women they love.

The Billionaire’s Student by Savannah Reardon

Katie’s parents die unexpectedly, making her desperate for a way to pay for college. Billionaire Jace Weatherton is the answer, but in return, takes Katie on a wild ride of lust, submission, and love.

The Interview by Abby Weeks

Curvy Cassie Monroe moves to Canyon Cove with only one thing in mind–finding a job. But after a close encounter with her sexy billionaire boss, she’s finds more than she bargained for.

Hunting for Curves by Julianne Reyer

Matte, pronounced mah-tay, is Japanese for stop, and is used in some martial arts to end a fight. Sam enjoys various fighting disciplines and is a sexual submissive. What better safeword than matte?

The Greek Billionaire and I by Marian Tee

Too proud to let Greek billionaire Mykolas know she’s in love with him, schoolteacher Velvet ends up accepting his offer for a marriage of convenience. At least this way, he’d still be hers.

Mariel’s new political internship is off to a rough start. In over her head and caught in political intrigue, she looks to her boss’s hard discipline for guidance.

Ellie ran from Theo when she found out she was pregnant with their child. Now he’s found her and that old spark’s stronger than ever. But what will Theo do when he finds out Ellie hid his daughter?

His Weakness by E.K. Sabins

After the death of her parents, Ellie is in need of a husband and thrust into the opulent world of Boston’s elite. Will she find love with a handsome scion, or will she be his weakness?

The internship of her dreams leaves Amy’s head spinning, but when her boss takes her out to dinner, and she learns more about his hidden life, she’s drawn into a world she never knew existed.

Jessie knows better than to date her customers, but for the charismatic Senator Morrow she’s tempted. Could Washington’s most eligible bachelor be interested in the shy girl from the coffee shop?

Rae has three weeks of college freedom before she goes home to her fundamentalist family, so she shoves The Blond Hottie up against a wall in dark bedroom, and all Hell breaks loose.

Anything He Requires by Michelle Fox

Animal trainer Jessica Kingston thinks it’s just another job when wealthy Jacob Daniels hires her to train his willful puppy, but the way he crushes her lips when they kiss says otherwise.”