You are here: Products SEVEN-X by Mike Wech 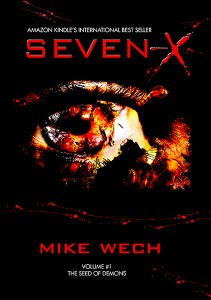 SEVEN-X is the first book in the SEVEN-X Trilogy, revolving around Los Angeles Times Investigative Reporter Eddie Hansen, who gets a tip on a missing death row prisoner being held at a Behavioral Health Center in a remote location outside the small town of Dell City, Texas. With an opportunity to break the story, Eddie voluntarily commits himself into the asylum in hopes of finding Annette Dobson, “The SIDS Killer.” She is rumored to have had her execution faked so she could be shipped to the asylum, have an exorcism and give birth to the child the world thinks is dead.

Eddie’s journals, video diary and recordings leave a trail of breadcrumbs into experimental procedures conducted on patients without their consent. As he dives deeper into his investigation, Eddie is forced to confront his own demons as an unwilling participant in the asylum’s controversial rehabilitation procedures.

Within minutes the whole story was in my head and I could see it happening, so I sat in my writing chair and twelve weeks later the first draft of SEVEN-X was complete.