You are here: Products Seven Days and Six Worst-Case Scenarios by Leslie Huggans 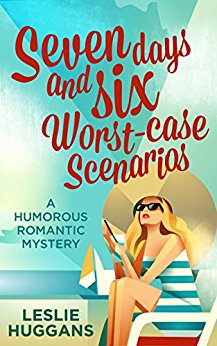 Mix dry wit with a juicy corpse and let it simmer over a red hot romance to serve up a wicked comedy.

Curious, quirky, crisis consultant Victoria Douglas needs a vacation, and to learn to keep her sassy mouth shut. Instead, she’s gunning a stolen SUV up a mountain with beer cans and bug spray as her only weapons in a fight for survival. She and her investigative reporter friend, Julie Tran, have landed in a Caribbean vacation crap-sandwich bursting with murder, narcotics, and one gorgeous piece of man-flesh.

College flame, Alex Marshall, professed his love and disappeared without a trace. Twelve years later he materializes at Victoria’s resort on St. Kitts and he’s got more charm and sex appeal than ever. Tingling lady bits and long-buried feelings aside, Victoria discovers she and Julie are at the center of a criminal conspiracy that stretches across two continents. They’ve got one chance to prove their innocence before competing nefarious factions feed them to the fish…or worse. Victoria has to decide just how far she is willing to go to save her life and mend her heart.