You are here: Products Service to the Nation by A.S. Peavey 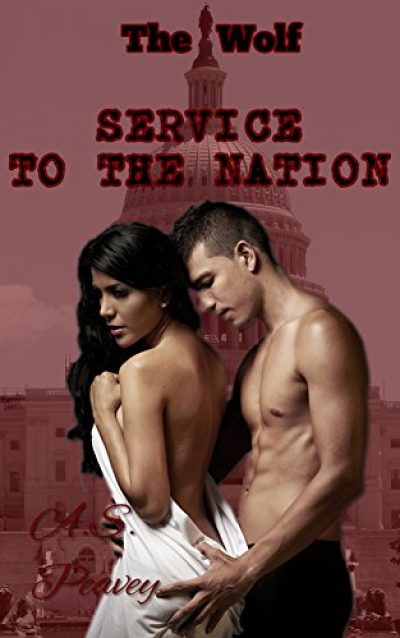 Service to the Nation by A.S. Peavey

The Wolf, seductive thief, has her work cut out for her when she takes on Representative Thomas Stride. Before she set her plots over him, Stride was destined to soar in power, even to achieve the Presidency—because he uses his skills for personal aggrandizement, instead of the betterment of his constituents.

Stride also uses his skills for his own sexual satisfaction. This leaves an opening for the Wolf to ruin his career—as a service to the nation—and, of course, to rob him. However, she cannot merely seduce Stride once, she must leave him constantly wanting more, while she infiltrates his home and uncover his secrets, until she can expose him and the dangers his power threatens.

A mysterious individual has hired her to undertake Stride’s fall, but she intends to pay herself, pilfering his art, jewelry, and other riches—not to mention the pure joy of ruining Stride’s career. But just who is the insider who the Wolf convinced to help her infiltrate Stride’s life? And what reward can she expect from that accomplice?

This is a stand-alone story of the Wolf, but her exploits have appeared before, beginning with “The Wolf Escapes.”

A.S. Peavey is branching out from micro caption-based Erotica (which you can check out on Tumblr), to explore the world of longer form stories and novels, and is excited by the opportunities offered to expand on those shorter stories, and grasp what tugs at the libido. Peavey lives along the Rocky Mountains, going out to hike and bike when time and the weather allow.

The character of the Wolf is loosely inspired by Arsene Lupin an early 20th French character who was created as a criminal answer to Sherlock Holmes. For some reason, it just made sense to have a thief combining their intellect with their sexual prowess to commit burglaries. At least, it seemed fun.

Be the first to review “Service to the Nation by A.S. Peavey” Cancel reply