You are here: Products Serenity: A Dark Romance by Skye Bailey 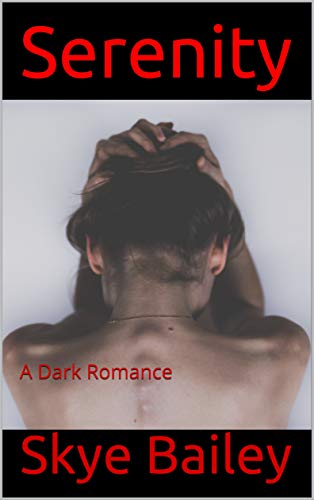 Serenity is a young woman who is abducted and thrust into a world of cruelty, abuse, and torture. But just when she gives up hope of ever being free, a savior comes to her rescue. This is a story about abuse, brokenness, healing, love, and hope.

Serenity has married her high school sweetheart and started a family but even though she found love, she soon realizes it doesn’t bring a happily ever after. Tragedy strikes in a most unexpected way as she makes one fatal mistake that will change the course of her life forever. They say what doesn’t kill you makes you stronger. Will she be able to get out alive and put the pieces of her life back together?

Skye Bailey is the pen name of an author who lives in the United States. She likes to write heart-wrenching, dark romance stories with characters that have gone through hardship and abuse and have survived and become thrivers. The author herself has gone through many struggles in her life and sometimes incorporates those struggles into her stories. Her stories will almost always have HEA endings because the author loves to give her characters hope and happiness in the end after much hardship.

Serenity is a very dark story. It was hard to categorize because it does have a lot of explicit, graphic sexual content but it's not necessarily erotica, especially in the beginning of the book. But without it, it would have taken a lot of the intensity out and diminished the story. It's rawness is what gives it its beauty. Beauty not in what Serenity went through, but beauty found in her spirit and in the spirit of anyone who has gone through trauma and survived.

Serenity came from intense feelings of what some women who go through terrible trauma, go through. It is dark and disturbing, but at the same time if gives hope. It shows just how resilient the human spirit is and no matter what anyone has gone through, there is hope for a better life.

Serenity woke up feeling groggy. She opened her eyes but couldn’t focus them for a minute. She felt so tired and sleepy. Had she finally been able to get some rest? Did Jack take care of the kids after she got home? Did the Tylenol help Brian calm down?
She laid there for a while with her eyes closed. Why was it so quiet? Something was up.
She opened her eyes again and tried to move a bit but laid back down as nausea and dizziness hit her. She closed her eyes for a minute then opened them again.
Something wasn’t right. The house was never this quiet. She wanted to call out to Jack but realized that something was covering her mouth. She tried to focus again and this time she was able to see more clearly.
She quickly realized she wasn’t in her house anymore. She was in a strange place she didn’t recognize.
She tried to move but couldn’t move her hands and feet. Her hands were tied in front of her together with her feet. She was lying down on some kind of mattress on the floor. There were no windows in the room. The only light came from a light bulb hanging from the ceiling. She began to panic. What had happened? She couldn’t remember anything. Last thing she remembered was going to the store for some children’s pain reliever.
She wanted to cry. Then she heard footsteps approaching and saw the door in front of her open. As soon as she saw who came through the door she remembered. It was the man from the parking lot who was trying to sell her scarves and blankets.
She immediately realized it had all been a ploy to get her to go to his van and had fallen for it. She remembered looking into his van and trying to look at the scarves and blankets but it was too dark and she couldn’t see anything, then she felt a sharp pain.
He must have drugged her with something. Her heart began to race as the man walked over to her with a big smile on his face.
“Hello darlin. You comfy?” he asked in a jovial voice.
Serenity was crying now. She was bound, gagged, and trapped and had no idea what the man was going to do to her.
“I see you’re awake now. Did you have a nice nap?” he asked looking down at her like her expected her to answer.
Serenity just laid there, afraid to move.
“Are you hungry or thirsty at all?”
She nodded.
“I’m going to sit you up and take off the gag but I need you to be quiet, okay? If you don’t listen and do what I tell you, I’m going to get very upset with you. Do you understand?” the man asked in a serious tone.
Serenity nodded.
The man proceeded to remove the gag from her. As soon as the gag was off Serenity screamed for help as loud as she could. Then she felt a sharp stinging, pain on her face and everything went dark again.
*
“Donna,” the man’s voice said. “Donna, it’s time to wake up,” the voice continued.
Serenity opened her eyes. She felt awful, like someone hit her in the head or something. Then she remembered again. She tried to move but couldn’t. She realized she was still bound and gagged. The man was sitting next to her on the mattress.
“Donna, I’m really disappointed in you. I told you to be quiet and what did you do? You go and scream,” the man said looking at Serenity with a scowl on his face.
Donna? Who was Donna? Was he talking to her? Had the man mistaken her for someone else? Maybe this was all a misunderstanding? Maybe it was simply mistaken identity and when the man realized she wasn’t Donna he would let her go?
“I’m going to give you another chance,” the man said. “You promise me you’ll be quiet,” he said evenly.
Serenity nodded.
Slowly the man took off the gag.
“Here, drink some water.” The man sat her up and helped her take a few drinks.
Serenity didn’t realize how thirsty she was. How long has she been out of it? “Can I say something?” she asked him.
The man nodded.
“I think you made a mistake. I’m not Donna.”
The man chuckled. “Donna, you always were a jokester. I knew you were mad at me and that’s why you ran off but I found you like I told you I would.”
“But I’m not Donna. My name is-“
Serenity felt a hand hit her across the face. The force threw her back down onto her back. She cried out in pain.
“Now you listen to me Donna,” the man said getting on top of her and crushing her with his body.
“I said I don’t want to hear no more nonsense.”
Serenity was sobbing. The man looked so angry. She hated how he had a wild look in his eyes. She wondered if he was all there or if he was crazy.
She nodded. She didn’t know what this man was capable of and she didn’t want to find out. He had already shown her a violent side by punching her in the face. She would play along with him for the time being until she could figure a way out. “I’m sorry,” she said in a calmer voice. “I was just joking around.”
The man got off of her. “I forgive you Donna but from now on, no more joking around. You have to follow all my orders, understand?”
“Yes.”

Be the first to review “Serenity: A Dark Romance by Skye Bailey” Cancel reply