You are here: Products Sent From Heaven (The Tucker’s Book 1) by Dee Dee M. Scott 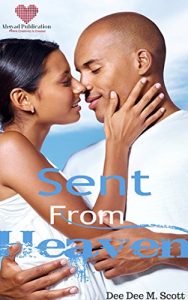 Best-selling romance author Maya Smith’s life is far different from the characters she creates in her novels. Left to raise a baby without the assistance of the married father, she has given up on finding a prince on a white horse to rescue her.

Enter Cardiologist and single father, Ford Tucker. Dr. Tucker is all work and no play. He has dedicated his life to work and raising his daughter. When Ford becomes Maya’s Cardiologist, he is instantly smitten with her.

Years ago, while vacationing with my family, the idea for the story popped into my head. It stayed on my mind for the remainder of the trip. I couldn’t wait to get home to write out my thoughts. I wrote the first book and had no intention of writing about them after that, but the characters continued speaking and before I realized it, I had a story for each family member.

Be the first to review “Sent From Heaven (The Tucker’s Book 1) by Dee Dee M. Scott” Cancel reply