You are here: Products Seduced by the Summon by Astera Maywood 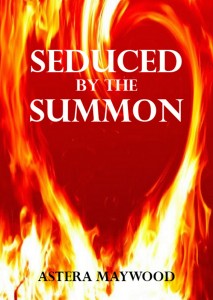 Seduced by the Summon by Astera Maywood

Yasmin, a young summoner, tests her power by summoning one of the Elemental Goddesses, Kiaresia, the Lady of Flame. Will Yasmin prevail over the goddess or has she gone too far? And what of her companion, the knight Shen, who, unbeknownst to her is traveling to her tower for a surprise visit?

Astera Maywood resides in the United States and is an Erotica and Fantasy writer. She is interested in diverse representation in her stories. She loves Fantasy and all manner of fantasy creatures, especially dragons and vampires. Besides writing, Astera enjoys and plays way too many RPG games.

Yasmin Brinn glared at the silver potion with the consistency of slush in her hand. “Come on now. Yasmin.” She thought, ‘Everything else is prepared all you have to do is drink your own work.’ She drank it with a grimace. The sensation of cold, like being submerged in a winter lake, instantaneously spread throughout her body. Yasmin shivered and set down the empty potion bottle. She glanced at runes and lines and circles written into the floors one more time before dropping her chalk.
She clasped her hands together, her preparations were complete. The summoning could begin. She opened her hands and reached for the two items she had set to the side, holding the staff in her left hand and the summoning tome in her right. A pause to take a few breaths then the correct incantations from the tome spilled from her lips. A flash of orange light exploded before her eyes with a loud sound like a castle wall crumbling.
Once her eyes had adjusted to the light Yasmin saw the being before her. She was tall humanoid of feminine appearance, skin golden and clothed in a dress that looked and moved as a forest fire did. The summoned being wore a ringlet as a crown, with a matching bracelet around her left arm, an anklet graced her right ankle. Her deep set eyes, smoldering jewels, pinned Yasmin in place. Red hair curled past the being’s shoulders. Against her collarbone was a golden necklace with a small ruby attached.
Fear and lust stirred in Yasmin along with inadequate feelings about her relatively short stature and hair. She compared her shoulder-length curly auburn hair against the goddess’ wavy carmine locks, which went to her knees.
Nonetheless she gathered her courage and spoke: “I, Yasmin Brinn of Falaern have summoned you here, Kiaresia, Lady of Flame, Monarch of Autumn. I bid thee to obey mine commands, goddess!”
“That’s not how it goes, little summoner.” Kiaresia grinned, her expression mocking. “You’d have to best me in battle first. You can’t defeat me, inexperienced summoner!”
“I have defeated you before!” said Yasmin.
“I recall you had aid. A knight. He isn’t here now is he?” A cruel smirk. “You’d be a smear of ash on the ground if that knight was not there.” Kiaresia looked at the summoning circle that surrounded her. “I would not be here.” She lunged her face towards Yasmin with menace though the magic of the circle repelled her. “And you’d be ash yet.”
Yasmin flinched but raised her voice, “I could have defeated you without his meddling help. Even if assisted, I still defeated you all the same. By the Laws you may not injure me. I have followed the Procedures and I have done everything right so far, to seal the deal I only have to…” Yasmin paused a blush broke across her features.
“Can’t say it?” Kiaresia grinned. “Screw.” She drew out the word. It sounded filthy coming from her bright red lips. “Join with me in one of the most intimate of ways and I maybe your summon, your servant.”
“Promise you will not harm me.” Yasmin demanded.
Kiaresia’s eyes sparked but she said, “I promise upon my essence that I shall not harm you. Is that enough?”
Yasmin nods, wary, and placed her staff outside by the circle, within reach.
She entered the circle. Kiaresia reclined and brought a hand to her lips and licked it. When she removed her fingers from her mouth, an oil coats each finger. She dragged her hand across her breasts and belly before settling between her legs.
Yasmin looked and then catching Kiaresia’s returning stare, looked away. Kiaresia had promised not to harm her with flames but within, Yasmin burned.
“If you do not start, I shall.” Kiaresia said and begins stroking herself.
Yasmin choked back a gasp, saliva gathered on her tongue.
“What is the matter little summoner, have you never touched yourself? Or seen another do so?” Kiaresia grinned and Yasmin notices now that her teeth are sharp.
Yasmin moved forward and felt daring when she gripped Kiaresia’s hand and dragged it away from between herself. Yasmin sighed in relief, the potion works because her hand does not burn away. Kiaresia gasps and looks at Yasmin wonderingly because of the frosty touch of the summoner’s hand.