You are here: Products Scoundrel’s Answer by Alistair Corvus 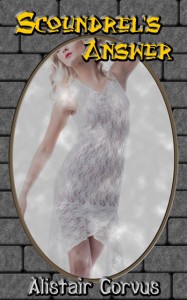 Every age has those it calls heroes, whether they be deserving of the title or not. Master thief Alan Tinsley was one such hero, forged by happenstance as much as skill. Years ago, his band of adventurers were the saviors of the kingdom, but now he is content to try to enjoy his retirement with his lovely wife. That peaceful plan is shattered when she is snatched away, presumably by someone from his troublemaking past.

Alan gathers old friends and new to recover the woman he loves, then sets forth on what might be his final quest. Can he resist falling back into old habits? Will he emerge from this new challenge unscathed, or simply descend back into a lifestyle of wandering hands and eyes?

Scoundrel’s Answer is a classic sword and sorcery tale of adventure, romance, and betrayal, interspersed with plenty of action and naughty diversions.

The interior of the manor was as lavish as its environs, with centuries of history of previous Counts displayed prominently on walls and stands. Paintings, tapestries, old sets of armor, everywhere one looked, new sights awaited the curious eye. Alan had seen it all before, and continued his long strides unimpressed. In his wake, there was soon the click of heels and swish of skirts as one of the maids stepped in behind him. The fact she said nothing to him told Alan all he needed of who she was.
“Daphne.” It was as close to a greeting as he would offer as he continued on his way.
“Alan,” The response came in soft, sultry tones. “You seem troubled.”
She was beautiful. That much Alan knew even without looking at her. He could picture Daphne in his mind’s eye, just from the rustle of her clothing, the click of those heels. She was fond of towering stilettos despite her already impressive height, and while the suede ankle-boots she usually favored would be inappropriate in her position as Varonne’s maid, a pair of strappy leather soled heels would fit right in, likely complimented with lacy stockings. A quick glance down to the woman’s legs as she came to stalk beside him confirmed those imaginings. Crisscross black leather straps left the arch of her foot and her toes on display through white lace stockings. Those stockings hugged up along legs that were long and sleek. Her skirt came to just above the knee, a somewhat utilitarian pleated black that still managed to cling to the curve of her ass, the swell of her hip. About her slender waist, an apron of white edged in lace with the same pattern of her stockings was bound.
The blouse itself was of a softer, clingier silk, black like the skirt, but cut low upon her shoulders and laid across the gentle swells of breasts that were just a little larger than a handful. Her smooth, flawless skin was a rich tan, almost golden in the flickering lamplight that lined the hall. Daphne appeared as some fae creature below the graceful line of her slender neck, but above, her face was absolutely devastating. Angular and soft all at once, the elven woman seemed better suited to regal finery than the servant’s outfit she admittedly wore so well. Full, pouty lips moist and crimson would be inviting if they weren’t set in a severe, flat expression. Her brows were delicately arched, and dark lashes were thick about eyes of startling amethyst, flecked with hints of gold. Long, dark chocolate locks were bound into an updo, pinned atop her head with small ivory combs that might be well above her station in any other household.
The two of them had history, a history Alan didn’t want to think about at that point in time. But the old rogue knew he could hide nothing from the elf. “My estate was attacked earlier. They took Lizzy.”
It was startling to see the elven maid unsettled by anything, but the look of surprise that crossed her lovely features was clear, however fleeting it might have been. She laid one slender hand on his shoulder. “I’m sorry Alan. Is she alive?”
“I can only hope. That’s why I’m here actually.”
“To see Lord Varonne,” She completed the thought, “You must be truly concerned about the ones who took her to seek his help at this hour.”
“The guild turned on me.”
“Devron wouldn’t do that. You know that, Alan.”
Tears threatened in the old thief’s eyes as he turned upon Daphne, “Don’t you think I want to believe that? But I saw her… I used the old mirror scroll and saw her. She was in the guild house. They were hurting her. They were using her.”
“Then they must die.” The words came so readily to the elven maid’s lips that a lesser man might find them chilling. Her expression had hardened instantly, into a terrible, cold facade. Suddenly she resumed her stride, walking before him with a purpose, leading him onward. In other circumstances, he would certainly have enjoyed the view, and for more than one reason. The swish of that brief skirt as it played about her supple rear and the backs of her thighs, the way her hips ticked back and forth were all very pleasant. But more so, when she was like this, it was just good to know that her anger was directed elsewhere. Behind her just might be the safest place to be.