You are here: Products Scarlet Sun by Isabel Hansen 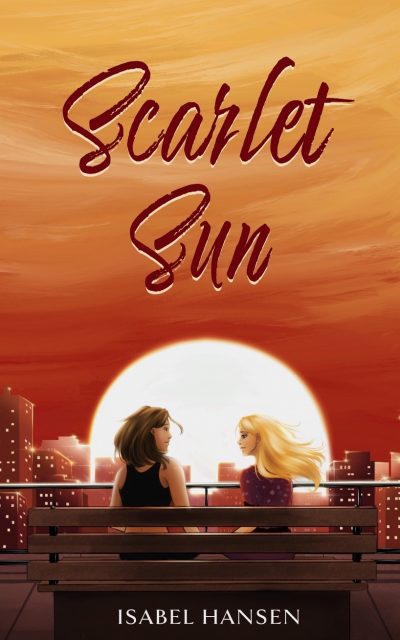 A bucket list with an approaching deadline, a road trip across the country, and a massive crush on her best friend… April Reed’s summer is turning into quite a mess.

Nineteen-year-old April has just gotten home from college when she finds a list she wrote years ago of things she wanted to do before she turns twenty. With her birthday coming up later that summer, the clock is ticking on finishing everything on the list. Skinny dipping? Camp in Algonquin? Fall in love? How can she manage all that in time?

When April’s best friends suggest they go on a road trip to complete all the tasks on the list, it seems like the perfect solution. There’s only one problem: one of those friends is Bree, a girl that April is quickly developing a hopeless crush on. Not wanting to ruin their friendship, April vows to keep her feelings to herself — but that isn’t so easy when she’s around Bree all the time. As the trip goes on, and the two girls get pushed together more and more, April can’t help but wonder if going from friends to lovers would be as bad as she once thought.

Filled with hilarious banter and hijinks, this sapphic romance is sure to put a smile on your face.

Isabel Hansen is an emerging Canadian author. She writes lesbian romance stories. In her spare time, she likes to read and play with her two dogs.

I always thought the summer after my first year of university would be magical. After all, I was returning home after eight months of living in residence — I would get to spend time with my family again, I could eat actually good food instead of the junk they served in the cafeteria, I wouldn’t have to share a bathroom with thirty other girls, and, most of all, I would have my own room.
I definitely over-idealized that idea in my mind.
My family was annoying me to no end, I apparently remembered my parents’ cooking wrong because it tasted barely better than what I had in the cafeteria at school, sharing a bathroom with my little sister was somehow worse than sharing it with thirty other college girls, and though having my own room was nice, it was also a total mess (and I would never admit this, but I missed my roommate, Elyssa).
I kicked my now empty duffel bag across the room and ran my hands through my hair. I had finally finished unpacking after coming home, but although my clothes were nearly put away, the rest of my room was still in disarray.
“I thought I was supposed to be relaxing after exams,” I muttered to myself as I turned to clean up my desk. I’d meant to clean my room before leaving for school so I wouldn’t have to deal with it when I came back, but of course, my laziness had won out, and I’d left the problem for my future self. Now cursing my past self for making that decision, I began the tedious task of sorting through the massive piles of paper on my desk. I pulled my small recycling bin over to beside the desk and began throwing out everything that I no longer needed.
There was a small knock on the door.
“Come in!” I called. I turned to see who was there. In the doorway was my eight-year-old sister, Jean. I smiled. Although we had a twelve-year age difference, I always enjoyed spending time with my sister. “Hey Jeanie. What’s up?”
“What are you doing?” Jean asked, walking into the room.
“I’m decluttering my room. Want to help?”
Jean shrugged. “Sure.”
“Can you sort through the papers and tell me if any of them don’t look like they came from a school notebook?” I asked, pointing to a stack of papers on the main part of the desk. Most of them were old high school notes, but I worried about throwing them out without at least confirming that there wasn’t anything important in the pile.
“Okay!” Jean said, bouncing on her toes.
“Thank you,” I said, ruffling her hair briefly.
I went back to sorting through my own pile, but it was only thirty seconds later that I was interrupted by Jean going, “Hey what’s this?”
I looked over as Jean tugged a small paper out of the middle of the pile, almost toppling the whole thing over. She held the page triumphantly. Unlike the other standard notebook pages, it was light pink and had drawings of flowers at the top.
“It looks like it’s from my old diary,” I muttered. I gently took the paper out of Jean’s hands and looked it over. At the top of the page, it said, 20 THINGS I WANT TO DO BEFORE I’M 20. Underneath was a list:

Jean looked at me with wide, curious eyes.
“Well?” She prompted when I didn’t say anything. She put her fists on her hips and tapped her foot. “What is it?”
“It’s nothing,” I said. I put the paper on the top shelf of my desk, much higher than she could reach, and turned back to the task at hand. “Just some stupid list I wrote in high school.”
Jean crossed her arms and looked up at the paper that was out of her reach with a large sigh. I rolled my eyes. She really needed to learn that she was not entitled to everything just because she wanted it.
“Are you going to help me, or just stand there pouting?” I asked. Jean sighed quite loudly again, but then grabbed another small pile of papers to sort through. We worked in silence for a couple of minutes before Jean couldn’t hold in her questions anymore.
“What kind of list was it?” She asked.
I shrugged, not looking up from the papers in my hands. “Just a list.”
“Right, but what kind of list?”
Recognizing that Jean would not give up until she got what she considered a satisfactory answer, I said, “It’s a list of things I wanted to do by this summer.”
Jean frowned. “Why this summer?”
“Because I turn twenty years old this summer,” I said. I threw a stack of old high school tests in the recycling bin beside me. “There were some things I wanted to do before my twentieth birthday.”
Jean nodded solemnly. “How many have you completed?”
“I don’t know,” I said.
“All of them?”
“Definitely not.”
“But some of them?”
“Yeah, I think so.”
Jean huffed, getting tired of my short answers. “Are you going to finish them?”
“I don’t know,” I said.
Jean huffed again. “I’m going downstairs.”
“Okay.”
Jean faltered, as though she expected I to stop her. I assumed she was only pretending to want to leave in the hopes that I would ask her to stay. Then, she would use wanting to know more about the list as leverage. But I could see straight through her.
“I’m really leaving,” Jean said. She took a step closer to the door. I glanced up.
“Okay, I’ll see you later.”
Jean frowned, but she did walk out. I shut the door behind her, then tried to get back to work. But within a couple of minutes, I found myself distracted again. What was on that list? I hadn’t looked it over very carefully before. How many of the items had I completed? Which ones were left? Was it possible for me to finish it before my birthday in two months?
I grabbed the list from the shelf and looked it over. Skinny dipping? I had never done that. Get a tattoo? I already had two. I glanced over the rest of the list. I wagered that I’d done about half of the items on the list. Whether or not I wanted to do the rest was a toss-up. Some of them were easy: dance in the rain, watch the sunrise, dye my hair. But some of them would be much harder, whether it be from an organizational standpoint or an emotional one: go on a road trip, conquer a fear, fall in love. I supposed if I really dedicated some time to it, I might be able to finish them, but it would definitely take a lot of effort.
I grabbed my phone and sent a picture of the list to my best friends group chat with the text, think I can manage it? It was a resounding yes from Bree and Kiara, ever the optimists, while Elyssa seemed unsure, and Harlee said there was absolutely no way. Although I knew Harlee was probably joking, hearing someone tell me I couldn’t do it made me want to try even more.
If there was one thing I enjoyed in life, it was proving people wrong.