You are here: Products Scandalous: The Senator’s Secret Bride by Imani King 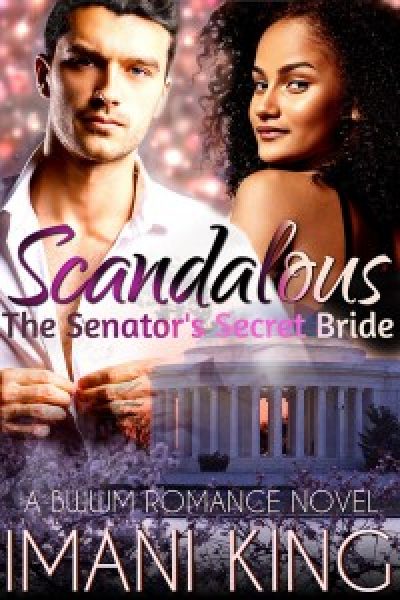 It was only supposed to be a one-night stand, a celebration of landing my new job with the campaign.

We met at a bar. He was gorgeous. And no one had ever turned me on the way he did.

In the morning, we said goodbye, and I knew it was the last time I would see him again.

But when I showed up the next morning… I heard that voice. The same voice that had told me I was the most beautiful woman he’d ever seen.

He was my boss. The Independent candidate for Senate in the state of Virginia. Nothing could top my shame that day, the worst day of my life.

But there were far worse days ahead. For a girl with no drama in her life, everything was about to explode.

My one-night stand turned into something far more scandalous. And all of America was watching.

In her fantasies, she and her billionaire Mr. Right travel the world, exploring different cultures and each other! These daydreams are the inspiration for her sizzling stories, so what are you waiting for? Give one of them a try and let her know what you think.

“John, don’t. This is what got us in trouble in the first—” He put his lips to mine before I could say another word. And like whenever he’d held me before, the room went blank around me, my mind tipping into that place of pure abandon. He pulled away and gently traced his fingers over my cheek and down my neck.
“You could meet me again tomorrow night,” he said. “You know, if we’re married…” His voice trailed off.
“John, don’t. This confuses things.” He took my hands in his, his warmth sparking through my body.
“Things were already confused. I’ll tell you though, Sonia. Maybe I just don’t know you well enough, but I’m crazy about you. Even if it ends up that we’re only friends, we’ll always be something to each other. Don’t you see that?” I swallowed hard, trying not to retreat into my blubbering anxious self again. “I’m conflicted too. But strategically, it’s the best thing we can do. If it doesn’t work out after the election, then it doesn’t work out.”
“Are you saying that it would be more than a contract to you?” My body buzzed with adrenaline. How would that be possible? This seemed like even less of a good idea.
“Maybe. Yes. I don’t know. But it wouldn’t be the craziest thing I’ve ever done. Running for Senate against my ex-wife would probably qualify for that award.” My stomach dropped. I craved John—craved his hands on my body, hungered for him with a delirious, aching need. But this was too much. It was too much pain for both of us, too much complication.
“I’ll talk to you on Monday, John,” I said, pulling away from him and walking towards the door. His eyes were still on me as I left, bringing that feeling of heat back to my center.
“I’ll be waiting.” His words hit me, sending a shock of anxiety through my body.

Be the first to review “Scandalous: The Senator’s Secret Bride by Imani King” Cancel reply