You are here: Products Saving The Day: A Romantic Suspense Anthology by MJ Nightingale 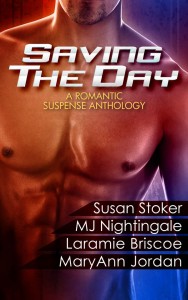 Saving The Day: A Romantic Suspense Anthology by MJ Nightingale

Saving the Day is a collection of four full-length, non cliffhanger books (over 800 pages!!) by four Bestselling Authors. This collection will only be available through April, so get your copy now!

Protecting Caroline: Caroline helps foil a terrorist plot when she finds herself on a plane that’s hijacked (with the help of 3 members of a SEAL team), but after she gets home she finds herself still in the sights of the terrorists. Will Wolf and his team be able to save her in time?

Meant To Be: Denise Cunningham is someplace she doesn’t want to be – in bed with the Heaven Hill MC. She’s dead broke and has two kids counting on her. When Liam rides up on the back of his Harley, offering her money, she eagerly takes up his offer. What she doesn’t realize is that Heaven Hill has enemies, and she is their new favorite target.

Beautiful Bounty: Ronnie Sears is in a whole heap of trouble. She’s been arrested for drug smuggling. Out on bail, she’s desperate to prove her innocence. She knows she’s been framed. Should she risk running? The man who bailed her out is Nikko Marino, and unfortunately they have a past. Will he bring her to justice if he catches her? Or will he lose his heart?

Love’s Taming: Annie lived a quiet life with her cats, in a tiny apartment over her veterinary clinic in the city…until mystery and danger knocked on her door. Shane, an undercover cop in a drug gang, never meant to drag the beautiful Annie into his life, but her skills as a veterinarian were needed. And her sunshine was the only light in his dark existence.

Can Shane save Annie when his world crashes down around them? Will her love be enough to tame the wild cop?

***Due to scenes of an explicit sexual nature and language some consider crude, this book is for 18+ only***

MJ Nightingale, MaryAnn Jordan, Laramie Briscoe and Susan Stoker are the authors of the books in this anthology. They are all on facebook and would love to connect with new readers.

I wanted to continue to write romance and erotica, but wanted to add depth to my characters and love suspense. I combined all three of these genres into one. I have met many authors in the Indie community and with three other authors who write in similar genres, we decided to put out an anthology of the first book in each of our current series in the hopes of expanding our readership.

Be the first to review “Saving The Day: A Romantic Suspense Anthology by MJ Nightingale” Cancel reply