You are here: Products Saving Lord Avingdale by Lisa Kumar 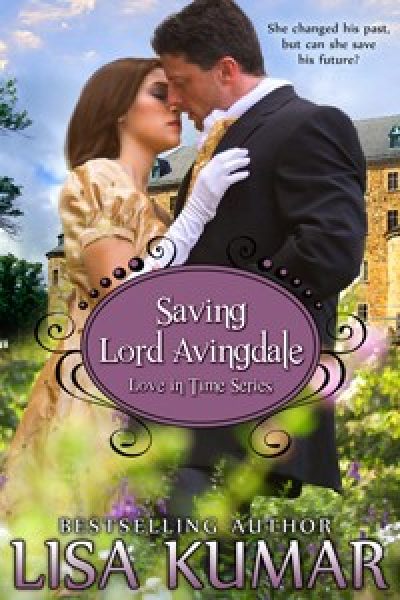 Maryanne loves being invisible, and her job as a time-traveling research scientist fulfills that desire. But when her invisibility transmitter malfunctions, the worse possible person—the Marquis of Avingdale—finds her. Handsome and debonair, the marquis shows interest, but his death is the reason she traveled back to 1813 England. When he forgoes a tryst with a married woman that would’ve proved deadly, Maryanne fears she’s changed the handsome lord’s future by ensuring his survival.

Jonathan Blakely, the Marquis of Avingdale, is on his way for an assignation with his latest lover when he spies the intriguing, yet socially awkward Maryanne at a house party. She’s crass in the most endearing way, but she’s keeping secrets—ones he is determined to find out. The more she avoids him, the more he’s compelled to solve the enigma she presents. What he doesn’t wager is that doing so will transport him to a new world of wondrous inventions and tie him to Maryanne in a way he never thought possible.

Lisa Kumar is a wife, mother, and romance writer who grew up in small-town Indiana. She now resides in the suburbs of Chicago with her husband and two sons. When not spinning tales of romance and fantasy, she can be found with her nose buried in a book, or more accurately, her e-reader. Her scholastic background is in psychology, which enabled her to get low-paying jobs in the human services sector. Needless to say, she’s now writing full-time.

Lord Avingdale stared at her with eyebrows drawn together. “You, what are you doing behind that plant?”
“Me?” A nervous laugh bubbled from her lips, but she had enough remaining sense to slip the computer into her reticule. “I’m looking…for something.” Her statement came out a question, and she closed her eyes. This so wasn’t going well. “And that would be?”
Her mind spun for a reasonable explanation. “I dropped my reticule, and some of my coins spilled out.”
He regarded her with a piercing gaze and reached out a white-gloved hand. “Let me help you up, Miss….”
She flushed under his perusal—and the fact his clipped English accent did funny things to her stomach. Avoiding his gaze, she took his hand without thought—something she never did. Though they both wore gloves, his touch seemed to sear through skin and down to the bone. It was a delicious feeling, not a disgusting one like she’d feared, and had her tingling in the most disturbing way.
He effortlessly lifted her to her feet but made no move to release her. She licked her dry lips, trying to get her hormones to settle down. Her other hand itched to make sure her mousy brown hair lie in its proper coiffure, but she rammed that feeling down. She wasn’t here for a beauty contest or even to impress anybody. Good thing, because she’d lose on both accounts.
“Terrance.” Which was her real last name, but using it here couldn’t hurt.
He gave a bow that dripped insolence and laid a kiss on the back of her hand. “Jonathon Blakely, Marquis of Avingdale at your service.”
If the touch of his fingers had sent jolts through her, the feel of his warm lips through her glove nearly electrocuted her. She smothered a groan. Her mission stared her in the face, her motto of no interaction long gone, and she could barely get a coherent thought in. What was worse, she barely cared about any of it if she could bask in his presence. Time to stop the madness.
Bracing herself, she spoke in her strongest voice. “Lord Avingdale.”
She executed a small curtsy, aware she was probably murdering the movement and that they’d circumvented protocol by not being formally introduced. But since she wasn’t from this century and hadn’t planned on meeting anyone, let alone her quarry, she was going to play it cucumber cool.
“You are here for the ball?”
“Yes.” So far, so good. Her act was holding up.
“Where is your chaperone?”
Sweat wove its way down her back, and her act threatened to crash and burn. Why all the questioning? Couldn’t he just leave? Did he have a tryst to attend? The longer he stood here talking to her, the longer he delayed what must happen.
If he didn’t get a move on, the results could be disastrous. She didn’t want to rewrite history, only record it. Focus, Maryanne. Where could your “chaperone” be? “In the ballroom…or maybe in the card room.” From the journals some of the ball attendees and house party guests had kept, she knew there was a card room.
“And does she know where you are?”
She grimaced sheepishly. “Probably not.” As she doesn’t exist.
“Does this chaperone have a name?”
Her mind went blank. “Mrs. Feathering.” She bit her lip and gazed at him through her lashes. Why did he keep on questioning her? Didn’t he believe her? Probably not. She wouldn’t believe herself either if she were him. She hated lying, and doing it chafed at her very nature. Unfortunately, her job required selective truth—or untruth—in these instances.
“It seems she’s remiss in her duties.” A silken quality entered his voice, and the sweeping look he sent over her body had a million thoughts ricocheting in her head.
Her already thundering heart pounded faster. “Mrs. Feathering loves to socialize. She sometimes forgets about me, but all in all, she’s an acceptable chaperone.”
“I see she is. If you like to sneak off to assignations, she’s perfect.”
“I’m sure I don’t know what you’re implying, my lord.”
“I think you do. You were lurking out here for some reason, but I hesitate to assign you a more nefarious purpose.”
She tilted her head up proudly and spoke through tight lips, making sure to act like she was looking him in the eye. The area between his brows was the target her gaze landed on, but he didn’t need to know that. “I assure you I was not on an assignation.” At least not the kind he was talking about.
“If you say so.”
“I do.”
His calm arrogance remained unfazed. “Before you are compromised, let us go back to the ballroom.”
“No. Uh, I mean, I really need to find….”—what did they call a bathroom here—“the retiring room. If you could just point me in that direction, I’d be very appreciative.”
He studied her as if she were a puzzle that needed to be solved. “You’re highly unusual and have a most odd way of speaking.”