You are here: Products Savannah Sins by Jenna Fox 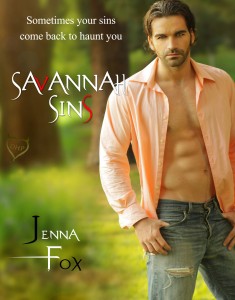 Her prison becomes his hell…

The only thing standing between Beverly Price and a prison cell is her well connected attorney, Jackson McNabb. Jackson pulls some legal strings, getting Beverly sent to his family’s plantation to work out her sentence at an isolated setting- the perfect place for sexual escapades. When Jack and Beverly act on the pent-up lust burning between them, their passion rouses an angry and restless spirit, setting off a series of frightening paranormal events and sending Beverly fleeing the arms of her lover, leaving Jack to fight for both of their lives.

Her work is born from real life experiences, an overactive imagination and a consuming caffeine addiction. Fox is a listener of bad-ass music and a watcher of classic slasher films. In short, she’s a multi-tasker – a writer, a storyteller, able to make a boo-boo all better with just one kiss and a proud, world class expert at screwing up recipes and scaring away closet monsters. She believes in ghosts and God and is absolutely convinced chocolate soothes the savage

He pinned her back up against the wall, anger blazing in his eyes. The corner of his lip curled and his forehead wrinkled. “The spoiled little rich girl wants attention by trashing her room.” He yanked down his zipper. “Well, now she’s got it.”
Jack was up in her face when Beverly’s hands slapped against the sheet rock, seeking purchase as he kneed open her legs. Her feet left the floor and she braced her legs around his waist when he forced his thighs underneath hers. He slammed his cock in her slit, the force making her pussy burn and spasm from the delectable shock.
The muscles in Jack’s arms corded as he reached around and spread her ass cheeks as wide as they would go. Beverly’s eyes nearly rolled to the back of her head with the chafing of his jeans against her, and his denim covered skin on hers fired new pleasure receptors to life. She never considered that area an erogenous zone.
Beverly had never considered a lot of things until Jack introduced them.
Her eyes jarred in their sockets and her spine jolted with the furious pounding of her body against his thighs. The dry friction rubbing against her clit and Jack’s heated breath was a cocktail strong enough to push her across the finish line. His sun browned skin was reddening, pulling taut over his cheekbones. Beverly wondered if she looked as crazy as he did. She laid her head against her shoulders and dug her fingernails into his shoulders, as he wrecked her in the way she always wanted.