You are here: Products Savage Possession by Margaret Tanner 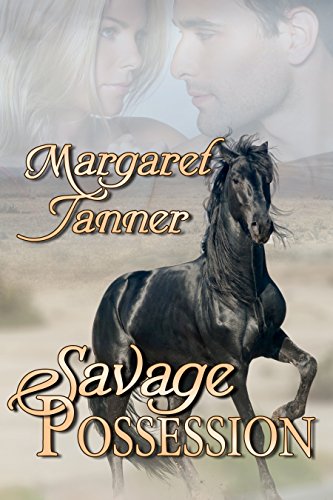 A mistaken identity opens the door for Martin Mulvaney to wreak revenge on his mortal enemy.

To save her brother from prison, Elizabeth Campbell rides over to plead his cause with their hostile neighbor, Martin Mulvaney. Caught in a fierce storm she is thrown from her horse. Suffering amnesia from a head injury she stumbles into a camp of rogue gypsies. After days of living in terror she manages to escape her captors.

Martin Mulvaney, a wealthy recluse lives in a mansion shrouded with dark secrets and scandal. Brought up by a tyrannical father he has never known love or affection.

One wintry night he finds a young woman (Elizabeth Campbell), collapsed on his doorstep. Babbling and distraught and with no memory of who she is, the only words he hears clearly are “Don’t take me back to the Black Stallion.”

Believing she has run away from the Black Stallion, a classy bordello, Martin takes her to his bed. Realizing his mistake when it is too late, he sets about teaching her to be the woman of every man’s fantasy.

Weeks later, he is stunned to find out his dream woman’s name is Elizabeth. She is the granddaughter of his mortal enemy, the proud old Scottish highlander, Fergus Campbell.

By this time Elizabeth is with child, and Martin is compelled to marry her.

When her memory returns, Elizabeth does not recall her ill-treatment at the hands of the gypsies, but is shocked to find herself married to Martin. She soon realizes he is not the black hearted villain her grandfather painted him. Is it possible to teach someone who believes women were put on the earth purely to satisfy a man’s carnal needs, the difference between love and lust?

Enemies from Martin’s past, intent on exacting revenge, kidnap Elizabeth who eventually manages to escape her tormentors.

By the time Martin realizes he loves his wife, bushfires are laying waste to the countryside, and Elizabeth and her unborn child are trapped. Martin sets out on a desperate mission to save them. On the burnt out grass of the Campbell farm, he has to deliver not one, but two babies.

For Martin and Elizabeth a new life and love springs force amidst the ashes of ruin.

As part of her research she has visited the World War 1 battlefields in France and Belgium, a truly poignant experience.

There is a fine line between love and hate and I wanted to know what would happen when a man crossed over that line.