You are here: Products Sarah’s New Me #1: Heavy-footed Girl by Dusty Rae Baer 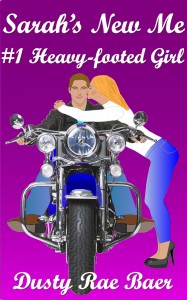 One day on the spur of the moment, I bought a lottery ticket and became a millionaire. It was only then that my boyfriend of three years suddenly became interested in marriage. I began to examine my life and realized that it had become routine and boring. I needed to reinvent myself so I dumped Tom and was literally speeding away when I got pulled over by a cop. Who could have known that that stop would put me on the path to a new me.

Be the first to review “Sarah’s New Me #1: Heavy-footed Girl by Dusty Rae Baer” Cancel reply