You are here: Products Santa’s Wayward Elf by Paige Tyler 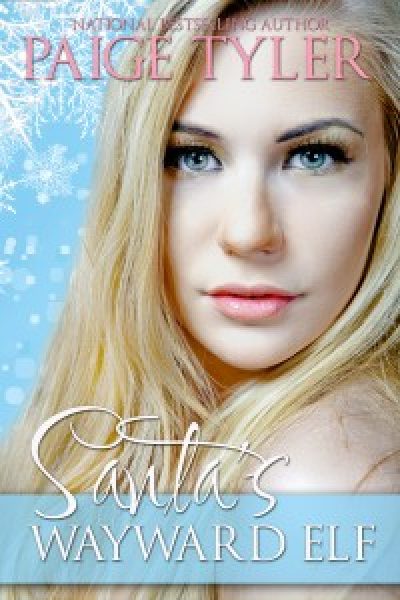 NOTE: This book has a guileless elf heroine you can’t help but fall in love with, a hunky hero who knows how to come to a girl’s – er, elf’s – rescue, some serious kissing under the mistletoe and lots of steamy hot romance!

Being one of Santa’s elves isn’t all sugar plums and candy canes.

At least not for Sosie. Taller than the other elves, she’s always had a problem fitting in at the North Pole, so when the transport sled she’s on breaks down in New York City on Christmas Eve, she can’t resist slipping away to explore the world of the “big

people.” While she’s having fun, the transport sled takes off, leaving the naïve elf stranded.

Fortunately, handsome police detective Derek Clayton comes to her rescue, offering to let her stay at his apartment. Having heard horror stories about the big people, Sosie is both surprised and relieved to meet such a kind, sweet man. Not to mention one so gorgeous and well-built.

Even though Sosie expects the North Pole to send out a search party any day, she finds herself falling for Derek. She desperately wants to tell him she’s an elf, but knows he’ll never believe her. When the lies and omissions start to pile up, Derek can draw only one conclusion—Sosie is working for the mob boss he’s been after for

Just when things seem like they can’t get any worse, the chief of elfin security shows up to drag Sosie back to the North Pole. How is a runaway elf supposed to overcome a determined security elf, dangerous mobsters and a suspicious boyfriend all while keeping her pointed ears a secret?

She is represented by Bob Mecoy.

Just imagine yourself in the booties of a completely guileless elf who’s never experienced the big city, the big people, or big romance…and you can probably figure out what kind of fun Sosie is in for. I think you’ll love reading my story as much as I loved writing it. So, get a cup of hot chocolate, a warm throw, and let Sosie whisk you off into a magical Christmas romance.

Excerpt:
By the time the party wound down a few hours later, Sosie was more aroused from her fantasies than she’d ever been in her life. She was an elf in lust and nothing was going stop her from getting Derek into bed with her tonight. She didn’t care how much of a gentleman he was, there was no way he was sleeping on the couch again. In fact, if she had her way, he wasn’t going to be sleeping at all.
After they got back up to his apartment, however, her confidence faltered. But then she thought of the frustrated night she would assuredly have ahead of her if she didn’t proposition Derek, and how much she would regret it when she left.
Taking a deep breath, she turned to face him. “I had a great time at the party. It was very nice of you to invite me.”
He grinned. “I’m glad you came. I had a good time, too.”
Sosie nibbled on her lower lip. Okay, it was now or not at all. Time to be a bold elf. She looked up at him. “You know, I feel awful about putting you out of your bed again. I was thinking maybe you might want to sleep with me tonight.”
He studied her in silence, his dark eyes unreadable. Sosie held her breath as she waited for him to say something. What if Tracee and Linda had been wrong? What if Derek wasn’t as “into her” as they’d thought?
“If I share the bed with you, Sosie,” he said softly, “sleeping is the last thing either of us will be doing.”
She gave him what she hoped was a flirtatious look. “Good. Then the mistletoe won’t go to waste.”
His mouth curved into a grin at the tiny sprig of greenery dangling from her fingers. “Mistletoe, huh?”
“I thought I could put it wherever I want you to kiss me.”
He chuckled. “Honey, you don’t need mistletoe for that. I’ve spent the past two hours fantasizing about kissing every inch of you.”
Her pulse skipped a beat. “You have?”
“Uh-huh.”
Cupping her face in his hand, he bent his head to cover her mouth with his. This time, there was no hesitancy in the kiss. This time, his mouth moved over hers with an urgency that left her breathless, and she had to cling to his shoulders to keep from melting as his tongue plunged into her mouth to take possession of hers. It was as if he couldn’t seem to get enough of her. The desire was mutual. She couldn’t get enough of him, either.
With a groan, Derek swung her up in his arms and strode toward the bedroom. She’d never had a guy do something so romantic before—mainly because she was always taller than the elf guys she’d slept with—but she decided it was very hot.
Once beside the bed, Derek set her on the floor, letting her slide slowly and deliciously down his body. Arms still looped around his neck, she pulled him down for another kiss. This time, she was the aggressor, her tongue seeking his and exploring every inch of his tasty mouth.
Derek groaned and ran his hands down her back to firmly cup her ass through the tight jeans she wore. She murmured her appreciation against his mouth as he pulled her more tightly against him. His erection strained against his jeans, pressing into her tummy. Mmm. Well, that answered the question as to whether he was well built everywhere. It felt as if he had a huge candy cane hidden in there.
Suddenly impatient to see how well built, Sosie ran her hands down his chest to the bottom of his shirt and urgently pushed it up. Derek must have thought she needed some help because he reached back and pulled it over his head to toss it on the floor.
She’d thought getting a glimpse of him without a shirt last night had been a treat, but seeing all that sculpted muscle up close was even better. Figgy, he was gorgeous.