You are here: Products Sans War by Ann Sepino 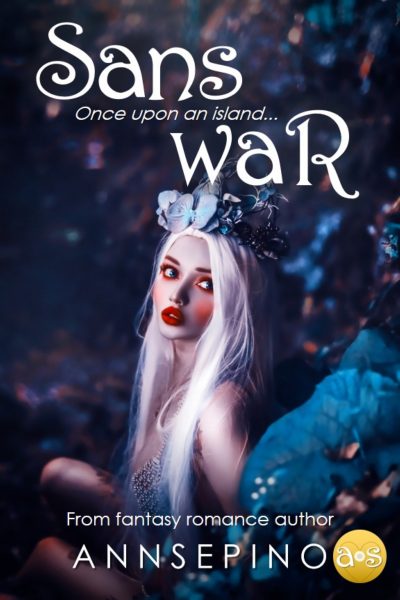 “Once upon an island, two warriors learned to love.”

In the realm beyond where humans live, the Bunog and Tayhu have been warring over trade routes and territories for nearly a century. Magda, a Bunog with blood that makes her as fast and strong as most of her enemies, is swept away by the stormy seas while fighting a Tayhu. She ends up on an island in human territory—along with the man trying to slay her.

Just as she regains consciousness and attempts to finish Malakan off, two children appear before them, hungry and in need of tender loving care. Unwilling to battle in front of innocent eyes, they agree to a truce. It plunges them into a different kind of war, one they have to wage not only on the mysterious monster inhabiting the island but also against their blossoming emotions.

In this story inspired by the nature and mythology of Panay, Philippines, discover a tale that starts with enemies and sparks a romance.

Ann Sepino is an independent Filipino author who loves all things fantasy romance. She enjoys creating the perfect happily ever after for her knights-in-distress and damsels-in-shining-armor. Her inspiration comes from the fairy tales and folklore of her childhood, as well as her interest and experience with local culture. One of her best titles, 'Tribeless,' was influenced by these very elements.

Ann Sepino wrote her first 'book' in kindergarten for an English and Reading homework. She officially started publishing her short novels in 2018. 'Sans War' was inspired by a trip she took in 2019. She traveled to the different scenic parts of Panay Region and used those destinations as the basis of her story.

Magda wrinkled her nose at the sight of him, not believing that he could so casually lay there and slumber while she, his greatest enemy, sat close by.

But much as she hated to admit it, she envied him. His whole body was relaxed, from the bulk of muscles in his arms, to the planes of his chest, to the dip in his stomach, to the cords and sinews of his thighs. He slept like he had no cares in the world, almost akin to some earthen god or deity whose duties for the day were done.

The thought of following his example, of tucking herself into his side and laying languidly until she too drifted from the waking world, flashed briefly into her mind.

It was a thought quickly dismissed.

She wasn’t blind to the attractiveness of the sleeping Tayhu, but she wasn’t some desperate sot either. So what if he was the finest specimen of the male figure she’d seen in a long while? So what if he was the first person who’d been able to hold her so tightly that she’d felt his every breath and heartbeat? It wasn’t like he’d be the only one. The next time she made it out of the field unscathed, she’d find a Bunog just as ruggedly handsome, one who also looked like he’d fulfill every woman’s fantasy and more.

'No!' Her cheeks went red when a vision of this Tayhu fulfilling her fantasies surged forward. 'Stop thinking it, you idiot! And stop looking like a ripe macopa! He’s going to wake up any minute, and he can’t see you like this!'

Magda shook her head, managing to calm herself down mere moments before the Tayhu—Malakan—awakened. She held her breath as he came to. She watched him from where she sat at the door, deigning to speak until his eyes finally landed on her.

“Still alive, I see.” Her greeting wasn’t the warmest in the world, but it was the only kind she was comfortable giving him.

Unfortunately, if the frown on his face was any indication, he found it lacking. The Tayhu sat up, the bandage around his chest tightening as the muscles on his belly shifted. His long black hair, which had been an astounding length of mane only the day before, fell over his broad shoulders. “I haven’t woken up to the sight of a woman in months, you know. At least pretend to be happy seeing me.”

His voice was husky, and his eyes still retained the film of sleep. An unexpected dose of annoyance shot through her. How could he look so displeased and so smug at the same time? “Really? Some poor woman had the misfortune of waking up next to you?”