You are here: Products Sand Dollar: A Story of Undying Love by Sebastian Cole 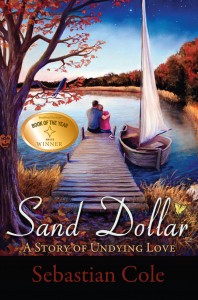 Sand Dollar: A Story of Undying Love by Sebastian Cole

Noah Hartman, eighty years old, lies sick in a hospital bed recounting his life of love and loss to Josh, a wise and compassionate orderly who stopped in to bring him dinner. As Noah’s loved ones arrive one by one to see him, they listen in on his story, and we’re transported back in time to Noah’s younger years.

Though outwardly seeming to have it all, Noah, now thirty-five, is actually an empty, lost, and broken man running on automatic pilot. He has no true identity due to having allowed his powerful, wealthy parents to manipulate, control, and brainwash him from a young age. With the threat of disinheritance and withholding love and approval if he doesn’t comply with the plan they have for his life, Noah is lured in by the reward of great wealth and the illusion of running the family business empire some day. Enter Robin, twenty-five years old, who — in direct contrast to Noah — is a vivacious, free spirit. Full of life and always living in the moment, Robin’s love saves Noah by inspiring him to stand up to his parents and live his own life at all costs, reclaiming his true self.

While snorkeling in the Caribbean, the captain of the boat warns them not to disturb anything in the sea. Ignoring the exhortation, Noah dives down and snags a sand dollar from the ocean floor, whereupon it explodes in his hand. With the fragile sand dollar taking on new significance, Robin inexplicably leaves Noah shortly after returning from their vacation. Like a passing breeze, she disappears out of his life without a trace, seemingly forever.

Years pass, and Noah still can’t get her out of his mind and out of his heart. After all, she’d always be the one who got away, the one he loved the most. That’s when he finds out about her hidden secret, the underlying condition responsible for her departure. Noah has no choice but to move on with his life without her, meeting Sarah at the premiere of SAND DOLLAR, the movie he wrote about his time with Robin.

Years later, it’s Noah and Sarah’s wedding day, and Robin discovers a clue that Noah had surreptitiously inserted into the movie, inspiring her to race to the wedding to try to stop it. With the wedding in shambles, the scene jumps back to present day, with both Robin and Sarah placed in Noah’s hospital room. But which one did he choose?

As Noah wraps up his story, we are brought up to present day, where Noah discovers a far greater truth about the past, present, and future. Things are definitely not as they appear as the pieces of a shattered love are put back together in the remarkable final chapter of Noah’s life.

Cole’s debut novel, Sand Dollar: A Story of Undying Love, reflects over forty years of personal life experiences. Sand Dollar has won numerous awards, including being the winner of the Beverly Hills Book Award, the bronze winner of ForeWord Reviews Book Of The Year Award , a finalist in the International Book Awards, and a finalist in ForeWord Firsts debut literary competition. With a rating of 4.5 stars on Amazon, the book has received rave reviews, many of which compare Cole to his favorite author, Nicholas Sparks. Whether or not he ever achieves that kind of success, touching the lives of others through his writing has been the single most gratifying thing he has ever done.

My guess is that most of us could probably tell our own version of Sand Dollar. That’s because we’ve all experienced love and loss in our lives. And for far too many of us, and for whatever circumstances, the one we loved the most was “the one who got away.” I’ve had one, and chances are, you’ve had one too! Sand Dollar tells of such a love – a love gained, a love lost, and through it all, a love that just won’t die.

Be the first to review “Sand Dollar: A Story of Undying Love by Sebastian Cole” Cancel reply