You are here: Products Samantha Posey Love Unfolded by Shantee’ A. Parks 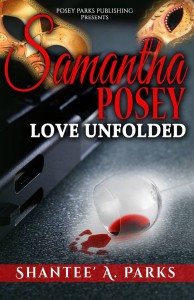 SAMANTHA POSEY is a wonderful party planner who does what it takes to make the party a success. She meets Jacob Latters, a successful business man, celebrity and millionaire playboy. Women are of no shortage to him, but finding love isn’t in the cards for him, though he wishes it was. Jacob has never met a woman like her. This is an encounter that will definitely change both of their lives. The sex is mind-blowing! She is so intoxicating to him he soon finds he just can’t leave Samantha Posey alone. They encounter one problem after another… kidnapping, lies, hypnosis, and families keeping them apart. Their addiction to one another is real. Will their love survive?

Shantee’ Parks from Detroit, MI living in Atlanta, GA. When I’m not taking care of my family I am either reading great books or writing new stories. I’ve been writing since high school. I love reading a writing about romance. A happily ever after (HEA) is always important. Some times I can leave a cliff hanger but I always give a HEA! I need that as well as my readers need it. I love to travel. I have been to London and Paris and would love to travel to Italy.

I thought about a party planning character and said let me see how much I can write. This was around Thanksgiving 2014 and when I started writing I couldn’t stop. This book contributed to so many late nights!

Be the first to review “Samantha Posey Love Unfolded by Shantee’ A. Parks” Cancel reply