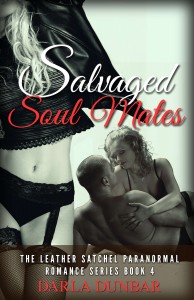 The Dark Side is winning. A Mystic has organized the evil monsters to steal every soul on Earth and leave it loveless. It is up to Valtina to do her part to save the human race. Sent by Ladaya back to Earth, Valtina’s job is to unite a mismatched couple with their true soul-mates.

Sebatian and Claudia were not meant to be married to each other. But a trickster was involved in encouraging the mismatch. Searching through her leather satchel, Valtina found the tools needed to do the job.