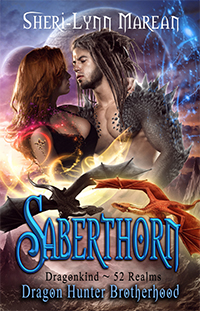 Is she his enemy …
… or salvation?

Only a soul mate can save him from turning rogue and setting humanity on fire.

When Saberthorn’s niece is murdered, his dragon cry of vengeance is heard far and wide. In days he’s eliminated all responsible, except one. The witch he seeks eludes him. Ten years later, on the verge of losing his humanity, a portal opens. The dragon in Saberthorn roars.

Could it really be her?

The hunt is on. But when he catches up to his amber-eyed enemy and she knocks him on his rear with a well placed fist, a deep craving awakens. Will Saber be able to follow through on his vow?

Hang on tight as you soar with sexy shifters because this powerful tale of love will leave you breathless.

When she wasn't bringing home stray animals, Sheri-Lynn would pretend to be racing horses around the yard. As a teenager, her dream of riding swift four-legged steeds became reality. Sheri-Lynn also went from paying a friend bubble gum to draw pictures of horses, to creating her own pieces of art, which she would later sell. At the same time her love for reading kicked in.

Sheri-Lynn eventually discovered her niche in the vivid and exciting paranormal romance and fantasy romance worlds. But, in 2008, she almost let her dog eat a book-it annoyed her so much. Don't panic, she didn’t do it. That would've given the poor animal indigestion. Instead, she challenged herself to create her own stories. Inspired by her favorite authors and TV shows, Sheri-Lynn decided upon immortals who can change into their dragons. Tierney, Jax, and Sami came to life, and the Dracones were born.

I was asked to join a boxset, and needed new content. So this is what I wrote. I've since expanded it, and written the 2nd in the series. This is a interconnecting spin off from my Dracones Series.

Whoever the witch was, the female sent him into a tailspin, and she was the enemy. An enemy he’d sworn to kill.
He caught up to her in no time, and using a cloak of invisibility to disguise himself, studied the sorceress from his dreams. She had grown her hair out, and now it reached midway down her back. He smiled at her curves and licked his lips, then frowned. Anger rose at the realization of how thin she’d grown over the last ten years. Though why he cared, he had no idea.
Saber stalked her, reveling in her honeysuckle sweetness. Then he caught a whiff of anxiety, along with a touch of excitement as she grew aware of being tailed. Could she be wanting this fight as well? She had to be tired of running. Perhaps she was eager to rejoin her family of murderers?
Though the idea of his prey rejoining her vile family filled Saber with rage. Yet, it wasn’t enough to squelch the thrill of the hunt. Even his dragon was like an eager puppy, practically salivating over her inevitable capture.
As she started to run, Saber picked up his pace. She was the enemy. The one who sent his brother to the underworld. Right on her heels, he inhaled her scent, drawing it deep into his lungs, and suddenly his blood felt like molten fire.
With the worst timing ever, his mind fractured.
Enraptured by the fiery strands of burnished copper flowing behind her like a living flame, Saber didn’t notice when his invisibility dropped away. Like a magical web, her hair enticed him, and drew him in. Then without conscious thought, Saber reached out. The ache to feel its softness overcame all reasoning, and he was a single thought, emotion, need. He had to touch. To feel.
She slowed, and a roar screamed in Saber’s head as a few strands slipped smoothly, like sizzling silk, between his fingers. She stopped.
Saber slammed on the brakes, but between his dragon and his heart thundering in his chest, he heard nothing else. It was like he was locked in a dream he couldn’t break away from. His prey whipped around and her eyes … her eyes, a bright amber full of rage, locked on him. Saber opened his mouth but nothing came out.
He froze, unable to move as she raised her fist and punched him in the face.
Everything spun and the breath whooshed out of him.
His ass met the ground, and one part of his splintered mind noted the setting suns, while the other gaped at the sorceress from his dreams. She was … her.
Saber blinked, and shook his head. She mesmerized him, took his breath, and left him stunned senseless. Then he realized his constant suffering was gone. He wanted to laugh. No one had bested him in years. Not since he and his siblings would play fight.
His prey opened her mouth, then closed it … and took off again. Saber watched her for a moment, then lay back. Once again the torment closed in, and he had to fight the cobwebs of his mind. Still shocked, but happily so, he touched his jaw where she’d decked him. An unexpected chuckle erupted. Damn. She was good. Who would have thought she’d pack such a punch?
He stared up at the sky. Everything appeared brighter than it had in a very long time. The power of dragonkind swirled through him, and his arousal pressed against his pants. A pressure began to build in his chest and suddenly his dragon roared with a need so fierce, it almost took his breath away.
Saber decided he’d given her enough of a head start and climbed to his feet. Adrenaline pumped through him with excitement. This was going to be fun. Fun? He couldn’t remember when he last had fun. Maybe when he’d been young?
Then his thoughts took a more intense turn. With her curves, he could almost imagine what she’d feel like underneath him, all pliable and willing. She might be a little thinner, though still robust enough to make him eager with anticipation. He wanted to touch, kiss, and taste every succulent inch of her.
As Saber’s burning desire to make the female his registered, he drew to a stop as if ice water had been thrown on him. What the hell? He shook his head and groaned, trying to calm his racing emotions. Why the fuck am I so bloody attracted to her? She’s the enemy.
She could have been the spawn of Satan, and he’d still want her.