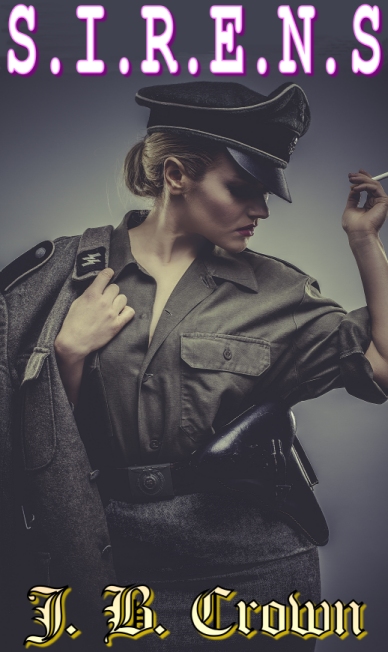 From the pen of steamy, short story writer J. B. Crown comes a full-length erotic, action/adventure romance novel.
It is the second great global conflict of the Twentieth Century. Winston Churchill orders the creation of a clandestine ‘Special Operations Executive’ with a mandate to ‘set Europe ablaze.’ Of around 13,000 agents, 3,200 are women. Life expectancy of an S.O.E agent in the field is only six weeks. Prior to the Normandy landings, the Allies devise an operation so important yet so risky it is considered almost impossible. With the liberation of Europe hanging in the balance, four women from very different places and backgrounds answer the call.
Formed into a specialised, dedicated team; they are the S.I.R.E.N.S.

I was raised in a strict, sexually repressive atmosphere. An INFJ (Myers-Briggs type) sensitive soul, the combination of physiology/psychology and upbringing made me a fish out of water when it came to intimacy and connecting with the opposite sex.

In my early twenties, while other friends were off exploring sex and relationships, I followed the logical path and left England to attend an evangelical Bible college in the USA. Culminating in several years spent travelling as a minister and missionary, it was only when my disillusionment with dogmatic theology and its disconnect from genuine love and reality became an issue, that I began to properly grow.

My movement into post-evangelicalism was accelerated after a chronic nervous breakdown. Work stress, exhaustion, and a personal and faith identity crisis collided and landed me in hospital with serious health problems.

Not wanting to take drugs, I began to experiment with CBT, NLP and other powerful techniques to reclaim my health, and re-invent/re-discover what it meant to be my authentic self. A self, free from the man-made chains of religious bigotry, but still with a genuine hunger to connect with the Divine presence in a real way. I believed the three words ‘God is Love,’ but had little interest in the controlling religions of man. Nor did I want to listen to absolute statements of language, that attempted to describe a being that transcends our ability to comprehend.

Part of my onward journey involved a battle with lifelong programming of negative messages relating to sex. Slowly the flower of my own sexuality began to open, and I finally laid all guilt and shame to rest.

All my adult life I had been approached by attractive, sexy women, wanting to engage with me. At last I was able to reciprocate. I discovered to my joy that the sensitivity with which I was born, and the genuine affection I had cultivated for people along the way, gave me the power to be a generous, tender and intimately satisfying lover.

I wish you health, wealth, and happiness. A life of joy harnessing and celebrating the fountain of your sexuality as the tremendous gift it is, in a way that seems right to you.

The subject of discretionary warfare during the second great global conflict of the twentieth century, has long been one close to my heart.
At a time when women weren't officially allowed to undertake combat roles, many courageous ladies sacrificed their all in covert service. S.O.E, agents typically had a life expectancy in the field of only six weeks.
With 2018 celebrating the centenary of women's suffrage, it seemed like a good time to combine my love of writing erotica and romance with this powerful historic backdrop.

“You can’t hide forever. I’m going to find you, my crazy Testarossa!” teasing tones lilted from the deep voice-box of a sturdy, black-haired man. He stumbled through the trees of the Bergamot Orange grove, ducking and weaving in an attempt to locate the source of female giggling ahead. A flash of fiery hair flicked between rows of the crop, causing fruit-heavy branches to sway violently.
“I’m too fast for you, old man!” a girly voice laughed.
Francesco Moretti stopped for a moment to stroke his chin. At a mere two months older than his twenty year old lover, he had hardly thought to qualify as a geriatric!
It was the summer of 1941. The handsome, sturdy Calabrian had just received his call-up papers to join the infantry. 33ª Divisione Acqui was a worthy assignment, though his heart ached at the thought of leaving Carlotta and their agrarian way of life. Francesco was not a violent or political man, but would serve his nation honourably now he had been called upon. He didn’t know what battles, defeats or victories their division might encounter. Right now he had a more pressing conquest on his mind.
Reaching up to one of the tree branches, the dark-haired, muscular Italian removed a Bergamot Orange from where it hung. Muscles tensed like a coiled spring, he waited for the tell-tale flick of red hair to dart between trunks ahead. Washboard abs strained beneath his simple white vest. Beads of sweat shimmered on a stoic brow. Unleashing the full gamut of youthful power, the athlete released his ammunition. Back-spinning fruit sped towards its target with lightning velocity.
The shock of impact on her shoulder blades caused Carlotta to stumble forwards and fall into the grass. Laughing hard, she almost wanted to pick herself up and keep running. Almost, but not quite. After all, some energy would be needed for what was about to happen.