You are here: Products Gator by S.E. Campbell 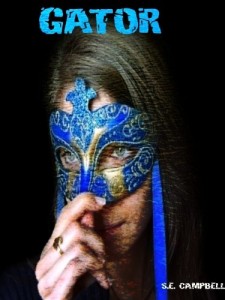 After November Grey flies all the way from Toronto to attend a music academy in North Carolina, she is soon immersed in a world a lot different than the one she knew before. Just as she starts to get used to her new surroundings, though, she meets a mysterious boy named Titus who can swim like a fish and has eyes that glow in the dark. One night, when her friend forces her into a night visit to the lake, she finds Titus skulking around. Curious, she trails after him and runs into scaly green lizard men. She soon learns, to her horror, that anybody who sees these men, or “gators,” will be stalked and killed. Now, thanks to her stupid mistake, she must run for her life. But luckily, she has Titus around to protect her.

S.E. Campbell is a bestselling author who published her first book at seventeen. Now, along with working with Richard Turke on the Visible Scars series, she is also writing the books for the feature film franchise, Jezebeth. Her novels, Specimen X, Specimen Y, and Specimen Z, are being made into movies by SGL Entertainment. She is the published author of The Bloodstone Trilogy, number four Amazon bestseller How to Get Dirt, and Tasting Silver. She is currently twenty-two years old.

I love romance. I noted there was no alligator shifter YA books, so I wrote one!

Be the first to review “Gator by S.E. Campbell” Cancel reply