You are here: Products Romeo & Antoinette by Rob Ziser 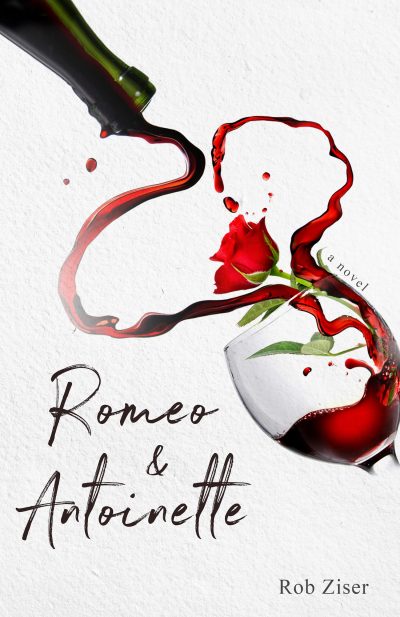 One fine summer day, food loving Antoinette meets soulful painter Romeo, and it’s instant fireworks and infatuation. Turns out though, their families own rival restaurants. Their parents hate each other. Their fledgling careers are headed in the wrong directions. Their friends are involved in the stupidest, ongoing, most juvenile, tit-for-tat series of altercations the likes of which usually isn’t seen outside the confines of kindergarten. And the universe seems to be conspiring against them at every turn. Despite all that, love blossoms and boots start knockin’ as Romeo and Ant fall desperately for each other.

But when Ant’s family’s restaurant suddenly gets vandalized, her brother ends up in the hospital and a mysterious blonde appears out of nowhere to challenge her for Romeo’s affections she’s left with one big question.
Can she trust him?

Sure of her answer she attends the summer’s biggest social event determined to say goodbye and move on. But as the guests mix and mingle, fate intervenes. Romeo’s greatest rival crashes the party, setting off a sequence of events that places Ant in mortal danger. Romeo rushes to save her. A desperate rescue that leaves him fighting for his life and forces her to face her true feelings for him. Giving Ant an even bigger question to consider. The only question that really matters. Does she love him?

Rob Ziser is currently residing somewhere along the Eastern seaboard. When he's not writing he can most often be found in the kitchen, cooking up some high falutin', fancy pants dinner for his darling wife. Currently, he's at work on his next novel, which we're told, has something to do with man's search for inner peace. And donuts. Inner peace and donuts…