You are here: Products Rogue Dragon Rising, part one by TJ Shaw 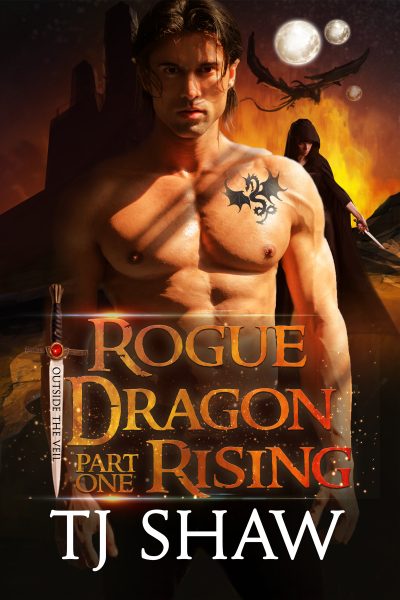 Twenty-three year old, Amari Hawke, is thrust into the world of two-soul shifters when she is injured and kidnapped by trackers outside the veil, beyond the safety of her homeland. Unable to remember her past, she trusts no one and relies on instinct to survive. As her awakening approaches, the first time she will transition into her animal, she must evade rogue shifters trying to capture her.

Now free from the King’s Army, powerful dragon lord, Jaxon Blackthorn, seeks a peaceful life. Intent on building his lands into a viable plantation, away from war and bloodshed, he is reluctantly pulled back into the fight when he defends the mysterious shifter with no past against an unseen enemy.

As evil threatens to destroy the entire realm, can the battle-hardened warrior and coming-of-age noblewoman accept their differences to forge an alliance that will ultimately unite the shifter nations?

As a child, TJ thrived in the Arizona desert. By the age of five she was riding horses through cotton fields and by eleven bought her first motorcycle, a Honda 125cc dirt bike. Growing up with teachers as parents meant traveling during the summer. Hiking, backpacking, fly fishing, climbing pyramids, surviving earthquakes, and flying in hot air balloons were just some of her adventures. An avid day dreamer, she would lose herself in mystical worlds and far off places limited only by her imagination.

After choosing an academic scholarship over an athletic basketball scholarship, she graduated law school and accepted a position as a Deputy County Attorney. However, prosecuting felony crimes was not as exciting as she hoped, so she traded in her briefcase and the courtroom for a Glock and patrol car. She worked the road as a police officer for five years and now tells officers what to do as a policy writer for a police department.

TJ writes from her heart by incorporating her dreams and experiences to create strong, passionate characters who must overcome personal flaws to survive against the challenges of traversing through magical realms, undiscovered planets, and apocalyptic catastrophes.

I've always been fascinated with dragons and the idea of having a cohesive relationship with an animal. I also love the idea of people forging strong relationships through their struggle to survive by overcoming evil . Rogue Dragon Rising is a product of these passions.

His baritone voice rolled over Amari and soaked into her skin, fostering the hair on her arms to rise. She inhaled a breath to gather her thoughts and lifted her head. Her eyes widened. A small gasp slipped out before she could catch it, and any further attempt to draw air into her lungs ceased over the larger-than-life male consuming her vision.

Wearing tan pants and a white collared shirt, Lord Jaxon Blackthorn sat astride a magnificent black beast, his elbow resting on the saddle horn. His mount shifted, and Lord Blackthorn’s body compensated with an easy grace. The suns at his back cast him in a muted glow, accentuating his cheekbones and rugged jawline. A breeze kicked strands of black hair across his face in a wildness that pleased her. The man before her would never be mistaken for a sheep, and her body hummed in appreciation.

“Resting,” she gasped out, wondering when her lungs would start working again.

Lord Blackthorn glanced toward the others. “By yourself?”

“I like being alone,” she said with a small shrug. Fidgeting under his stare, she would have squirmed out of her skin and fled into the surrounding forest if possible. Running trembling fingers through her hair, she concentrated on keeping her heart from thumping out of her chest.

He followed her movements, and she sizzled inside. Her head wound must be more severe than she thought because no sane woman would be excited over the hungered focus of this predator.

Be the first to review “Rogue Dragon Rising, part one by TJ Shaw” Cancel reply