You are here: Products Rogue Alliance (The Rogue Saga) by Michelle Bellon 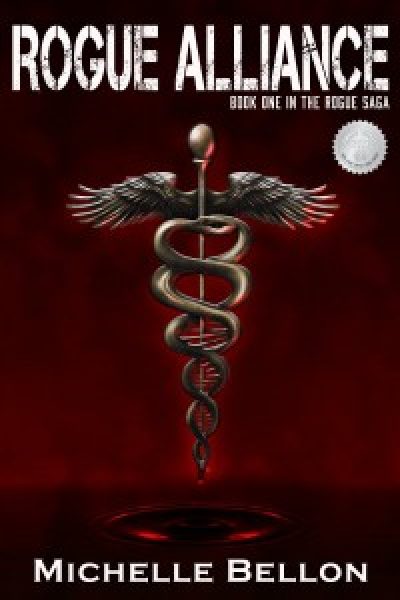 But some history doesn’t stay buried.

When Shyla goes undercover to bring down drug kingpin Victor Champlain, the case takes her back to a town that hasn’t forgotten her, and to a past she thought she’d left behind.

Then, she meets Brennan Miles, a genetically altered kidnap victim, who has been turned into a weaponized super-human. Victor helped Brennan escape from a hidden genetics research facility known only as The Institute, where he’d been held and experimented on for years. In return for his freedom, Brennan now works for Victor as his bodyguard.

Shyla is drawn to Brennan’s strength, and to his humanity. Even after she discovers his secret — he must have human blood to survive. Shyla knows she can’t take down Champlain by going through Brennan — he’s too strong — and he’s loyal to Victor.

Michelle Bellon lives in the Pacific Northwest with her husband and their four children. She works as a registered nurse and writes in her spare time. She writes women’s fiction, romance suspense, YA, and literary fiction. She has won three literary awards and plans to release her next title, JADED, this July.

The idea for this story came to me one day while I was on a road trip. The scene from the excerpt above came to me first. From that scene both characters were strong in my mind; their pasts, their flaws, and their struggles. The rest of the book came from that intense scene.

His arms were filled with her, his mind consumed by her. The sweet taste of her made him heady and irrational. But underlying the passion, the need to satiate his desire, was another, more ruthless instinct.
Though Brennan had taken his daily supplement, and had been successful at curbing his unnatural and ingrained yearning for weeks, the smell of her just under his nostrils, so close and so warm, triggered that hated thirst. It made him sick to his stomach to think of how badly he wanted to give in to both desires. Which was the strongest? He wasn’t sure.
As if sensing his weakness, she tipped her long neck back and exposed it to him, daring him. With her fingers in his hair, she pulled him in until his lips touched the smoothness of her skin. The pulse was quick and strong under his lips. His body strained. His muscles were taught, and he sensed that the smallest provocation would send him over the edge. He didn’t trust himself, and not for the first time.
Unable to resist, he kissed the small dip in her throat. With a flick of the tongue, he tasted her salty skin. The she spoke, and the desperation in her voice made him hesitate.
“Just do it.”
Confusion segued to startling realization as it dawned on him what she was suggesting, but he didn’t pull away. With his lips against her throat, he closed his eyes and fought the raging war within. It would have been so easy to sink his teeth into her flesh. God, he really was a monster.
She spoke again softly, the encouragement in her voice near pleading. He saw a tear run down the side of her neck.
“Just do it. I can’t do this anymore. I just want all of it to go away.”
Her raw emotion and pure vulnerability slapped him back to his senses. Pulling back, he looked into her face. The pain was pure and unhindered. Her typical thick bravado was nowhere to be found. Only the depth of who she was, and what she feared, got exposed in that moment.
Guilt and shame plagued him, but, more than that, everything about Shyla haunted him.